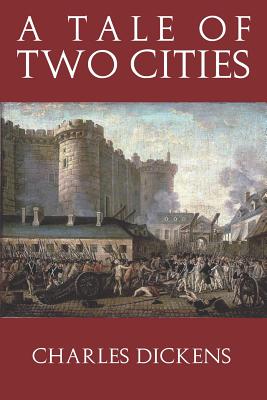 By Charles Dickens
$27.00
Likely 2-7 Business Days; Some Exceptions
(This book cannot be returned.)

Set in times right before and after the French Revolution, this 1859 Charles Dickens classic explores the uprising and the evolution of its egalitarian motives into a stream of bloody retributive trials and executions to avenge past injustices. Dickens presents the travails of a French Nobleman, Darnay, and Dr. Manette, a physician who had once been wrongfully imprisoned by Darnay's uncle, the Marquis, for hiding his own crime. As anger against the nobility's atrocities boils over, people take up arms, led by Defarge, and storm the Bastille. Defarge also initiates the wrongful trial of Darnay, to punish him for sins of his ancestors. Helped by his friends Carton and Lorry, Darnay, his wife Lucie and father-in-law, Mannette, flee France for the safer shores of England. In this three part novel, Dickens exhorts future revolutionaries to never lose sight of the values of justice and equality in their thirst for vengeance.

Born on February 7th on 1812, Charles Dickens is hailed as a literary legend. A journalist, illustrator, editor and novelist, he authored famous and beloved classic pieces of fictions such as A Christmas Carol, Oliver Twist, David Copperfield, Great Expectations, A tale of Two Cities and many more. He is considered one of the most prolific and influential writers of 19th century.