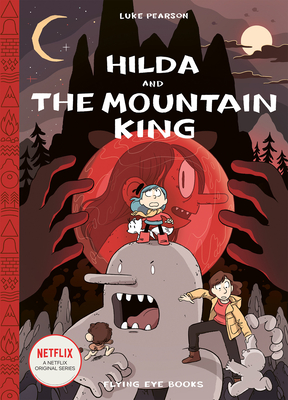 This is book number 6 in the Hildafolk series.

The newest book in the beloved Hilda series continues the action-packed adventures with our beloved Hilda stuck in the body of a troll trying to save all of human and troll-kind! Hilda and the Mountain King takes off from the cliff hanger in Hilda and the Stone Forest that left you waiting breathlessly!

We rejoin our heroine for her latest adventure just as she awakes to find herself in the body of a troll! Her mother is worried sick, and is perplexed by the strange creature that seems to have taken Hilda's place. Now, both of them are in a race to be reunited before Ahlberg and his safety patrol get the chance to use their new secret weapon to lay waste to the trolls, and Hilda along with them!

Luke Pearson is the creator of the Hilda series of comics. He is also a writer and co-executive producer of the Bafta winning animated series of the same name. Outside of Hilda, he has been an illustrator, a storyboard artist and has drawn a range of other comics. He lives with his family in Nottingham.

“Pearson thinks kids can handle a lot: visually, emotionally, thematically. That’s why they like his work, and why I do too. Simplicity can be a virtue, but there’s also something to be said for embroidery, and he takes just enough from each of those attributes to make strong books […] The panel structure of Mountain King is as visually complex as the range of emotions in the story, and yet neither is hard to read. It feels cinematic without leaving comics behind.”
—Hillary Brown, The Comics Journal

"This is an adventurous and delightful story that follows Hilda as she wakes up a troll and seeks to become human again. With lots of action, a tenacious heroine, and fantastic illustrations, children are sure to enjoy following the latest graphic novel installment of HILDA AND THE MOUNTAIN KING. Highly recommend for reluctant readers and/or anyone who wants to enjoy a thrilling and engaging fantasy adventure."
—Olivia Farr, YA Books Central