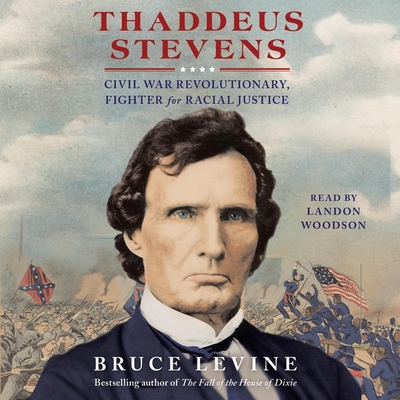 By Bruce Levine, Landon Woodson (Read by)
Email or call for price
Backordered

The definitive biography of one of the 19th century's greatest statesmen, encompassing his decades-long fight against slavery, his key role in the Union war effort, and his postwar struggle to bring racial justice to America. Thaddeus Stevens was among the first to see the Civil War as an opportunity for a second American revolution--a chance to remake the country as a true multiracial democracy. One of the foremost abolitionists in Congress in the years leading up to the war, he was a leader of the young Republican Party's radical wing, fighting for anti-slavery and anti-racist policies long before party colleagues like Abraham Lincoln endorsed them. It was he, for instance, who urged Lincoln early on to free those enslaved throughout the US and to welcome black men into the Union's armies. During the Reconstruction era following the Civil War, Stevens demanded equal civil and political rights for black Americans, rights eventually embodied in the 14th and 15th amendments. But while Stevens in many ways pushed his party--and America--towards equality, he also championed ideas too radical for his fellow Congressmen ever to support, such as confiscating large slaveholders' estates and dividing the land among those who had been enslaved. In Thaddeus Stevens: Civil War Revolutionary, acclaimed historian Bruce Levine has written the definitive biography of one of the most visionary statesmen of the 19th century and a forgotten champion for racial justice in America.