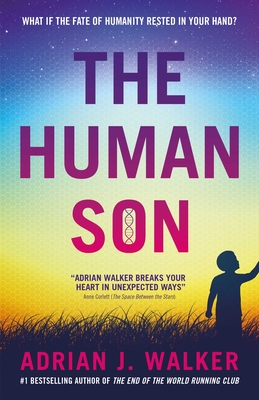 By Adrian J. Walker
$15.23
Ask A Bookseller For Help With This Title

The Earth was dying, and only the Erta could save it. Created to be genetically superior, hyper-intelligent and unburdened by the full range of human emotions, they succeeded by removing the cause: humans.

Now the Erta are faced with a dilemma—if they reintroduce the rebellious and violent Homo sapiens, all of their work could be undone.

They decide to raise one child: a sole human to decide if we should again inherit the Earth.

Adrian J Walker was born in the bush suburbs of Sydney, Australia in the mid-'70s. After his father found a camper van in a ditch, he moved his family back to the UK, where Adrian was raised. The End of the World Running Club is an international bestseller and was featured on Simon Mayo's Radio 2 Book Club. He lives in Aberdeen with his wife and two children.

"Adrian Walker's books always have big ideas that make me think, I wish I'd thought of that! But like any great writer it's the more intimate aspects to his writing, the humour and humanity, that really makes his work shine. The Human Son is another winner." -- Tim Lebbon, author of Eden

“Adrian Walker breaks your heart in unexpected ways.” -- Anne Corlett, author of The Space Between the Stars
— Anne Corlett

“The Human Son delivers a story that fosters a curious mind and an open heart, questioning and inspiring both without judgement.” -- SciFiNow
— SciFiNow

“There's a dark note of comedy... but things soon take a turn for the profound." -- SFX
— SFX Magazine

"A prevailing mood of ironic charm." -- The Times
— The Times

“Enthralling from the opening line, The Human Son is grounded and heart-rending, a human and hopeful entry to the library of post-apocalyptic literature.” -- Aurealis
— Aurealis

“The Human Son is a novel of emotional depth and maturity, handled by a writer at the top of his game, tackling philosophical topics with page turning effortlessness.” -- Storgy Magazine
— Storgy Magazine