The Awkward Phase: The Uplifting Tales of Those Weird Kids You Went to School With (Paperback) 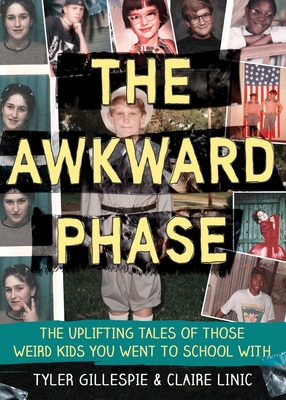 By Tyler Gillespie, Claire Linic
$16.50
Ask A Bookseller For Help With This Title

Based on the popular Tumblr, a collection of funny stories that commemorate the awkward phases in our lives.

Back in the 1990s, when slap bracelets and Velcro ruled supreme, two adolescents were stumbling their way through life on gangly limbs. One, Claire Linic, had self-permed her bowl cut, and the other, Tyler Gillespie, had purchased self-tanner, telling the cashier it was for his girlfriend. Now in their twenties and still just a tiny bit awkward, Linic and Gillespie have joined forces to ask the question, “If we could talk to our fourteen-year-old selves, what would we tell them now?”

Based on the hit Tumblr “The Awkward Phase,” this book answers that question with personal stories and cringe-worthy photos from seasoned comedians, YouTube stars, and people like the rest of us that cover everything from sweaty-palm moments to bad band photos. In these pages, you’ll hear about the moment Shaun Sperling realized he was gay at a Richard Simmons’s workout studio, how Bente Engelstoft made her own bra out of her dad's old underwear, and why even though Robert Bacon’s awkward phase was mortifying, it was the beginning of his new, happier life.

Ultimately, The Awkward Phase encourages us to laugh and celebrate the moments that have helped shape who we are. As Gillespie and Linic say, “Everyone is in on the joke. You don’t have to eat your lunch alone in the bathroom stall. You can sit with us.”

Claire Linic's 2013 Twitter @WeFoughtAbout went viral and was profiled in The Atlantic, New York Magazine, and BuzzFeed. She is a comedian and a Second City graduate who writes for Hairpin, The Daily Dot, and The Second City Network. She lives in Chicago, Illinois.

Tyler Gillespie is a comedy-writer and journalist who has written for Rolling Stone, Salon, The Daily Beast, and National Public Radio. He lives in New Orleans, Louisiana.