Vintage Spirits and Forgotten Cocktails: Prohibition Centennial Edition: From the 1920 Pick-Me-Up to the Zombie and Beyond - 150+ Rediscovered Recipes and the Stories Behind Them, With a New Introduction and 66 New Recipes (Spiral bound) 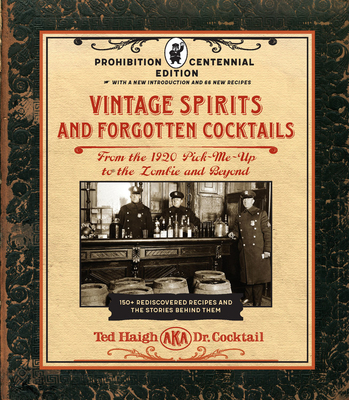 By Ted Haigh
$24.99
Ask A Bookseller For Help With This Title

In this new, expanded edition of Vintage Spirits and Forgotten Cocktails—issued for the 100th Anniversary of National Prohibition—historian, expert, and drink aficionado Ted Haigh, aka Dr. Cocktail vastly widens his examination of 1920–1933, the thirteen-year period when women got the Vote, child labor was abolished and, ironically, saw the cocktail elevated, prolonged, and expanded, spreading this signature American drink form in tasty ripples around the world. All this, plus more drink recipes!

Nothing is so desired as the thing denied. Prohibition made people want cocktails very, very badly. Because "synthetic" liquor was the easiest to make, it was also the easiest to get. Problematically, it tasted awful and wasn't exactly good for you either. Cocktails with their mélange of flavors were a made-to-order method for disguising the bad hooch.

Along with 100+ rare and delicious authentic recipes gathered from old cocktail manuals and scraps of paper never published, this illustrated trip down mixology lane tells the fascinating origins of the cocktail and how it evolved over time, including its rising popularity during Prohibition. Vintage illustrations and advertisements, photos of old bottles and cocktail artifacts, and fascinating Prohibition-era photographs bring the tippling past back to vivid life.

Recipes for rare treasures like The Fogcutter, Knickerbocker à la Monsieur, The Moscow Mule, and Satan’s Whiskers are each presented with: This homage to the great bartenders of the past and the beverages they created also profiles some of the most influential cocktail pioneers of today. For anyone who enjoys an icy drink and an unforgettable tale, this is a must-have volume.

Ted Haigh, a.k.a. Dr. Cocktail, makes his living as a graphic designer in the Hollywood movie industry and has worked on such spectacles as O Brother Where Art Thou?, American Beauty, and The Insider. Although he has been diligently researching cocktails since the '80s, his moonlighting as a cocktail historian became public in 1995, when he hosted the America Online spirits boards. In the intervening years, he has been quoted and referenced by the New York Times, Esquire, the Malt Advocate, and Men's Journal, as well as various books and other media. He is a partner in CocktailDB.com, an encyclopedic database of cocktail knowledge.