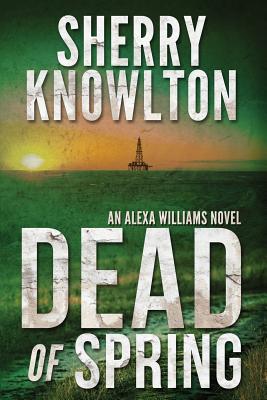 This is book number 3 in the Alexa Williams series.

When a beloved state senator plunges to his death at Alexa Williams' feet in the Capitol Rotunda, the authorities suspect suicide. Although the powerful chair of the Environmental Resources and Energy Committee was at the center of a controversial new bill to expand hydraulic fracturing, he was also rumored to be ill. Shaken, Alexa tries to move past the disturbing incident by concentrating on work. She's leading a senate commission on sex trafficking. Plus, she's helping an old college roommate sue a natural gas company for their role in causing her daughter's rare cancer.

In researching the lawsuit, Alexa becomes embroiled in the high-stakes politics of fracking. As the relationship with her state trooper boyfriend drifts onto the rocks, Alexa is drawn to a charismatic state legislator who's leading an anti-fracking crusade. Then, the police shock Alexa with the news that she could be in danger; she's a witness to the senator's murder, not his suicide.

When Alexa narrowly escapes a sniper's bullet, she must discover why she's a target―and who she can trust--before the next shot hits its mark.

With Sherry Knowlton's trademark mix of feminism, history, romance, and fast-paced thrills, Dead of Spring skyrockets from the fracking fields of the Marcellus Shale to the Three Mile Island nuclear disaster of 1979 to the rolling hills of Tuscany to the halls of Pennsylvania state government. In this suspenseful tale of corruption and runaway greed, Alexa Williams proves, once again, that she's a formidable heroine. The twists and turns will keep you on the edge of your seat.

Sherry Knowlton is the author of the successful Alexa Williams series of suspense novels: DEAD of AUTUMN, DEAD of SUMMER and DEAD of SPRING. When not writing the next Alexa Williams thriller, Knowlton works on her health care consulting business or travels around the world. She and her husband live in the mountains of South Central Pennsylvania. www.sherryknowlton.com

"DEAD OF SPRING combines legislative corruption with corporate greed that ends in deadly violence. Heroine Alexa Williams resists intimidation to battle evil at the highest levels of Pennsylvania government and commerce. Spurring her on is a love for the environment and for a friend whose daughter's cancer is caused by fracking. Here is a spellbinding yarn jerked straight from today's frightening headlines."


"Knowlton weaves a compelling tale, and the threads become tighter as the plot progresses. A suspicious suicide of a powerful politician takes on new meaning when Alexa Williams's investigations uncover corruption at the heart of the fracking industry. And when she becomes the target, the tension ramps up to a thrilling climax. Highly recommended."

"A lawyer who yearns for the quiet life proves a magnet for murder."... in a "mystery/thriller/romance with a complex heroine."

Dead of Spring is a highly readable book which captures the reader's interest immediately and swiftly carries him or her through a story which is always captivating and full of suspense. In this suspenseful tale ofcorruption and criminal greed, Alexa Williams proves once again that she's a formidable heroine. The ins and outs of the book will keep will keep you glued to your seat. It is a valuable book, which I would recommend to anyone who enjoys a good mystery and wishes to learn about an important neglected subject in American fiction.