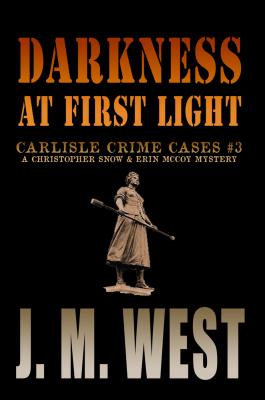 In "Darkness at First Light," Carlisle Homicide Detectives Christopher Snow and Erin 'Mac' McCoy discover an unidentified body, dressed like Molly Pitcher's statue, lashed to the cannon in front of the folk hero's gravesite. While at the macabre scene, Mac receives a call from Chief March assigning her and K-9 Officer Shadow to an Amber Alert kidnapping. In the process, the CPD IT guru discovers the girl online on a pay-for-porn site, which brings the FBI on board. The trail leads to the Revolutionary War reenactors' encampment at Valley Forge. As the detectives track 'Molly Pitcher's' elusive killer and Emma's obsessed kidnapper, the media dog their movements to get the scoop on the sensational trial that follows.

When Mac receives enigmatic, threatening jingles, she risks her life on a solo investigation. As a result, sparks fly as tempers flare at CPD. As the pressure builds, the danger increases Can Snow and McCoy's marriage endure the stress of double cases and an infant at home? Can the detectives corral the criminals before they destroy more lives?

Darkness at First Light is the third in the Carlisle Crime Cases series of murder mysteries featuring Homicide detectives Christopher Snow and Erin McCoy by Jody McGibney West, pseudonym for Joan M. West, Professor Emerita of English Studies at Harrisburg Area Community College, The Gettysburg Campus. She also taught at Messiah College and Shippensburg University as an adjunct and served as Assistant Director of the Learning Center (SU). She is a member of Sisters in Crime. She has previously published poetry and Glory in the Flower, her debut novel. It depicts four coeds who meet during the turbulent sixties. She and her husband live near Carlisle, Pennsylvania. They have two sons and two grandsons. In her spare time, West volunteers at the Bookery-Bosler Memorial Library's used bookstore, participates in the Litwits Book group, and reads voraciously.