Still Left Out In America: The State of Homelessness in the United States (Paperback) 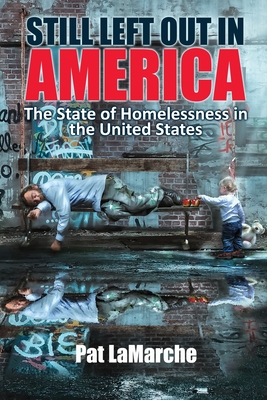 America... how could you let this happen?

As a career journalist and candidate for vice president of the United States, Pat LaMarche lived in homeless shelters and situations across the nation while campaigning. Her intent was to highlight the plight of folks she cared most about in our society: veterans, babies, kids and their parents, the elderly and the tempest-tossed (to quote Emma Lazarus from the Statue of Liberty). All those folks - she thought - were left out of the discussion during the 2004 election cycle. The book followed in 2005.

Fast forward 15 years - Pat has since worked running homeless shelters, fought with the system, crisscrossed the nation multiple times, and directed the kindness of others to help those she identified as needy.

This newly expanded book more than doubled the size of the original as Pat shares her experiences from the front lines. Mass sheltering, housing regulations, climate change caused homelessness, epic disasters affecting babies, toddlers, school kids, the working poor, veterans, and the elderly are chronicled - including Hurricane Katrina (where she was stationed as a journalist) and more recently Paradise, California, the site of the deadliest wildfires in California history which rendered 27,000 people homeless in a day. She also examines the coming eviction tsunami.

As a bonus, the original 2005 book is also included.