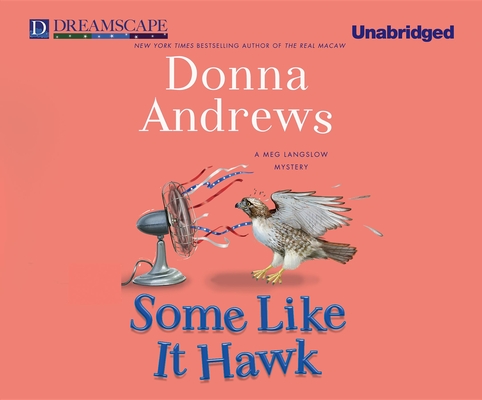 This is book number 14 in the Meg Langslow Mysteries series.

Meg Langslow is plying her blacksmith's trade at Caerphilly Days, a festival inspired by the town's sudden notoriety as "The Town That Mortgaged Its Jail." The lender has foreclosed on all Caerphilly's public buildings, and all employees have evacuated - except one. Phineas Throckmorton, town clerk, has been barricaded in the courthouse basement for over a year. But the lender seems increasingly determined to evict him, and may succeed after one of its executives is found shot, apparently from inside the basement. Meg and her fellow townspeople suspect that someone hopes to end the siege by framing Mr. Throckmorton. Meg soon deduces that the killer isn't just trying to end the siege but to conceal information that would help the town reclaim its buildings.

Donna Andrews is the author of the Meg Langslow mysteries, including Stork Raving Mad and Swan for the Money. She has won the Agatha, Anthony, and Barry awards, a Romantic Times award for best first novel, and two Lefty and two Toby Bromberg Awards for funniest mystery. When not writing fiction, Andrews is a self-confessed nerd, rarely found away from her computer, unless she's messing in the garden. She lives in Reston, Virginia. READER BIOWinner of more than a dozen Audiofile Earphones Awards and a three-time Audie nominee, Bernadette has been honored to narrate the work of Margaret Atwood, Joyce Carol Oates, Shirley Jackson and Anne Rice to name but a few. In the non-fiction category she has recorded the philosophy of Ayn Rand and the autobiographies of Barbara Walters and Katharine Hepburn. Popular favorites include Memoirs of a Geisha, The Devil Wears Prada and the Betty Smith classic, A Tree Grows in Brooklyn. Bernadette studied at The Royal National Theater in London and lives in New York.