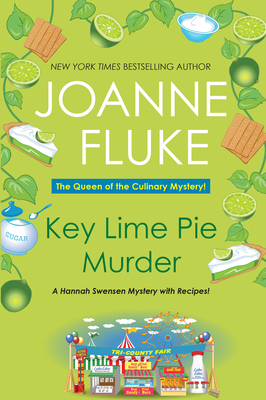 This is book number 9 in the A Hannah Swensen Mystery series.

The criminally delicious ninth installment in Joanne Fluke's New York Times bestselling Hannah Swensen Mystery series is now in trade paperback with a fun, fresh look! Hannah is busy juggling whipping up treats for the chamber of commerce booth at the Tri-County fair and judging the baking contest. But when Hannah discovers a fellow bake contest judge dead alongside an upended key lime pie, it's up to her to find the murderer before a carnival ride could be her last...

It promises to be a busy week for Hannah Swensen. Not only is she whipping up treats for the chamber of commerce booth at the Tri-County fair, but she's also judging the baking contest; acting as a magician's assistant for her business partner's husband; trying to coax Moishe, her previously rapacious feline, to end his hunger strike, and performing her own private carnival act by juggling the demands of her mother and sisters.

With so much on her plate, it's no wonder Hannah finds herself on the midway only moments before the fair closes for the night. After hearing a suspicious thump, she goes snooping-only to discover Willa Sunquist, a student teacher and fellow bake contest judge, dead alongside an upended key lime pie. But who would want to kill Willa and why?

Now Hannah needs to crank up the heat, hoping that Willa's killer will get rattled and make a mistake. If that happens she intends to be there, even if it means getting on a carnival ride that could very well be her last...

Joanne Fluke is the New York Times bestselling author of the Hannah Swensen mysteries, which include Double Fudge Brownie Murder, Blackberry Pie Murder, Cinnamon Roll Murder, and the book that started it all, Chocolate Chip Cookie Murder. That first installment in the series premiered as Murder, She Baked: A Chocolate Chip Cookie Mystery on the Hallmark Movies’ Mysteries Channel. Like Hannah Swensen, Joanne Fluke was born and raised in a small town in rural Minnesota, but now lives in Southern California. Please visit her online at www.JoanneFluke.com.