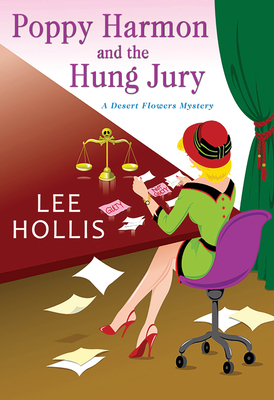 This is book number 2 in the A Desert Flowers Mystery series.

For retiree-turned-PI Poppy Harmon, spending her golden years running the Desert Flowers Detective Agency is far from the glamorous life she once knew. But becoming ensnared in two twisted Palm Springs crimes might be her worst look yet . . .

If Poppy didn't believe she was in too deep as the only female juror in a high-profile assault case involving an infamously hot-tempered crooner, she’s sure of it upon meeting blast-from-her-past Rod Harper. A former TV co-star from her short-lived acting days, Rod is as dashing as ever, and now he wants to partner again—this time to locate his missing daughter . . .

Returning a pampered songstress with a penchant for running away back home unscathed shouldn’t be too challenging. But dodging Rod’s charms while on the job is another story—and so is finding a dead body! When Poppy discovers a fellow juror face down in a swimming pool, she’s unwittingly thrust into a murder investigation with sinister parallels to the troubled chanteuse’s disappearance . . .

As Poppy struggles to survive a steamy love triangle while deciphering the connection between two seemingly unrelated cases, the Desert Flowers Agency must outsmart a ruthless killer who will do anything to keep hideous secrets hidden away . . . including ensuring Poppy becomes the next forgotten ex-actress to bite the dust . . .

LEE HOLLIS is the pen name for Rick Copp, a veteran Hollywood screenwriter who has written for numerous television series, including The Golden Girls, Wings, Scooby-Doo, Teen Titans, and Barbershop. He is the co‑writer of The Brady Bunch Movie and has written a number of novels under his own name. He also produces, writes, and stars in the hit web series Where the Bears Are. With his sister Holly Simason, he co‑authors the Hayley Powell Food & Cocktail Mysteries book series using the Lee Hollis name. He lives in Palm Springs, California.

“Hilarious . . . Pop culture references throughout add to the fun, and Hollis wraps up the mystery with a truly surprising twist. Cozy fans will eagerly await the sequel.”
—Publishers Weekly (starred review)

“A trio of likable sleuths in a story with a surprising twist for a cozy.”
—Library Journal

“The theatrical frame, combined with a set of quirky characters, and plenty of humor, distinguishes this delightful cozy.”
—Booklist