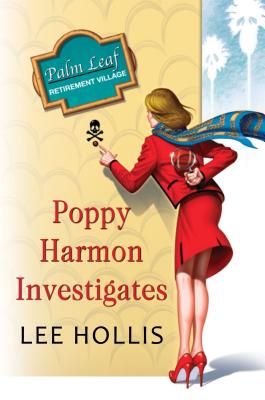 This is book number 1 in the A Desert Flowers Mystery series.

Lee Hollis begins a delightful new series in which Poppy Harmon and her friends find that life after retirement can be much busier—and deadlier—than any of them ever anticipated . . .

When Poppy goes from complacent retiree to penniless widow in a matter of weeks, the idea of spending her golden years as the biggest charity case in Palm Springs renders her speechless. With no real skills and nothing left to lose, Poppy uses her obsession with true crime shows to start a career as a private eye . . .

But after opening the Desert Flowers Detective Agency with help from her two best friends, Violet and Iris, Poppy realizes that age brings wisdom, not business—until she convinces her daughter's handsome boyfriend, Matt, to pose as the face of the agency. It’s not long before Matt’s irresistible act snags a client desperate to retrieve priceless jewelry burglarized from an aging actress at the Palm Leaf Retirement Village. Or before Poppy stumbles upon the bloodied body of the victim’s arch rival . . .

In a flash, Poppy’s innocent detective gig is upstaged by a dangerous murder investigation riddled with slimy suspects and unspeakable scandal. As she and her team uncover the truth, Poppy must confront the secrets about her late husband’s past and swiftly catch a killer lurking around the retirement community—even if it means turning her world upside down all over again.

LEE HOLLIS is the pen name for Rick Copp, a veteran Hollywood screenwriter who has written for numerous television series, including The Golden Girls, Wings, Scooby-Doo, Teen Titans and Barbershop. He is the co‑writer of The Brady Bunch Movie and has written a number of novels under his own name. He also produces, writes, and stars in the hit web series Where the Bears Are. With his sister Holly Simason, he co‑authors the Hayley Powell Food & Cocktail Mysteries book series using the Lee Hollis name. He lives in Palm Springs, California.

“Retired small-screen actress Poppy Harmon, the heroine of Hollis’s hilarious series launch set in California’s Coachella Valley, finds herself broke after the death of her conniving husband, who lost his job and all their money gambling without her knowledge. Regular work is not Poppy’s strength, so she takes inspiration from her old TV show, Jack Colt, PI, and fakes the requirements for her PI license. With Iris and Violet, two fellow residents of the Palm Leaf Retirement Village, she forms the Desert Flowers Detective Agency. After the ladies fail to attract clients, crafty Poppy enlists her daughter’s handsome wannabe-actor boyfriend as the agency’s face. Finally, aging actress Shirley Fox hires them to find her stolen jewels, the search for which leads to the uncovering of scandalous secrets and Poppy’s entanglement in a murder case. Pop culture references throughout add to the fun, and Hollis (Death of a Cookbook Author) wraps up the mystery with a truly surprising twist. Cozy fans will eagerly await the sequel.” —Publishers Weekly STARRED REVIEW


“The theatrical frame, combined with a set of quirky characters, including a 12-year-old computer whiz, and plenty of humor, distinguishes this delightful cozy, the first in a projected series.” —Booklist