A Newbies Guide to the Nexus 10: Everything You Need to Know About the Nexus 10 and the Jelly Bean Operating System (Paperback) 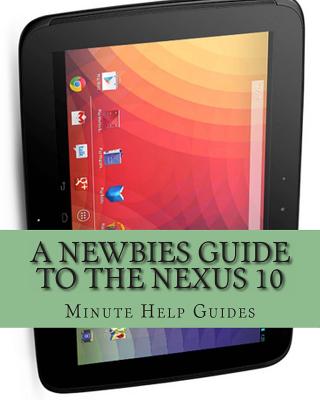 Before Google unveiled its new line of Nexus devices in 2012, few could've predicted the absolute frenzy these revolutionary devices would cause. Instant hits, each one of them - Nexus 4, Nexus 7, and the subject of this guide, Nexus 10 - is the best device ever released in its respective category. For newcomers to Android, the Nexus 10 is a pleasant surprise: better than every Android tablet that came before it, but also a better device than the ubiquitous iPad. In fact, the iPad's so-called "Retina Display" is not quite up to par with the Nexus 10's world-leading screen. For Android evangelists, the Nexus 10 is the "killer" device that everyone has been hoping for - the first tablet to marry Google's ideas about the future of computing with the top-notch execution that's been sorely needed from manufacturers of Android devices. While there's a little bit of a learning curve to get the most out of your new Nexus 10, don't worry; this guide will have you up and running in no time at all, ready to take full advantage of everything this tablet has to offer. We'll show everything you need to know to get started with the Nexus 10- Chrome, Gmail, Google Music, and everything in between. Whether or not you're already an Android user, you'll find plenty of helpful info within these pages. Ready to get started? Let's do it.