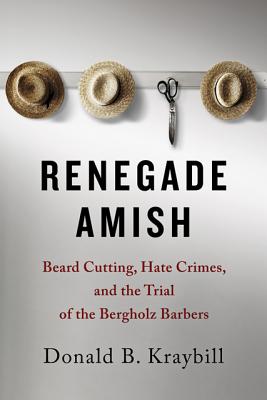 How a series of violent Amish-on-Amish attacks shattered the peace of a peace-loving people and led to a new interpretation of the federal hate crime law.

On the night of September 6, 2011, terror called at the Amish home of the Millers. Answering a late-night knock from what appeared to be an Amish neighbor, Mrs. Miller opened the door to her five estranged adult sons, a daughter, and their spouses. It wasn't a friendly visit. Within moments, the men, wearing headlamps, had pulled their frightened father out of bed, pinned him into a chair, and--ignoring his tearful protests--sheared his hair and beard, leaving him razor-burned and dripping with blood. The women then turned on Mrs. Miller, yanking her prayer cap from her head and shredding it before cutting off her waist-long hair. About twenty minutes later, the attackers fled into the darkness, taking their parents' hair as a trophy.

Four similar beard-cutting attacks followed, disfiguring nine victims and generating a tsunami of media coverage. While pundits and late-night talk shows made light of the attacks and poked fun at the Amish way of life, FBI investigators gathered evidence about troubling activities in a maverick Amish community near Bergholz, Ohio--and the volatile behavior of its leader, Bishop Samuel Mullet.

Ten men and six women from the Bergholz community were arrested and found guilty a year later of 87 felony charges involving conspiracy, lying, and obstructing justice. In a precedent-setting decision, all of the defendants, including Bishop Mullet and his two ministers, were convicted of federal hate crimes. It was the first time since the 2009 passage of the Matthew Shepard and James Byrd, Jr., Hate Crimes Prevention Act that assailants had been found guilty for religiously motivated hate crimes within the same faith community.

Renegade Amish goes behind the scenes to tell the full story of the Bergholz barbers: the attacks, the investigation, the trial, and the aftermath. In a riveting narrative reminiscent of a true crime classic, scholar Donald B. Kraybill weaves a dark and troubling story in which a series of violent Amish-on-Amish attacks shattered the peace of these traditionally nonviolent people, compelling some of them to install locks on their doors and arm themselves with pepper spray.

The country's foremost authority on Amish society, Kraybill spent six months assisting federal prosecutors with the case against the Bergholz defendants and served as an expert witness during the trial. Informed by trial transcripts and his interviews of ex-Bergholz Amish, relatives of Bishop Mullet, victims of the attacks, Amish leaders, and the jury foreman, Renegade Amish delves into the factors that transformed the Bergholz Amish from a typical Amish community into one embracing revenge and retaliation.

Kraybill gives voice to the terror and pain experienced by the victims, along with the deep shame that accompanied their disfigurement--a factor that figured prominently in the decision to apply the federal hate crime law. Built on Kraybill's deep knowledge of Amish life and his contacts within many Amish communities, Renegade Amish highlights one of the strangest and most publicized sagas in contemporary Amish history.

Donald B. Kraybill is a Distinguished College Professor and senior fellow emeritus at Elizabethtown College's Young Center for Anabaptist and Pietist Studies. He is the author, coauthor, or editor of more than a dozen books on Amish culture, including The Riddle of Amish Culture, The Amish, and Amish Grace: How Forgiveness Transcended Tragedy.