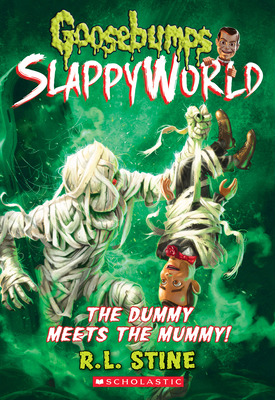 This is book number 8 in the Goosebumps SlappyWorld series.

A brand-new Goosebumps arc narrated by the most iconic and evil character of the series, Slappy!After being put back to sleep and abandoned in an old museum, Slappy is brought to life by a curious girl on a school trip. Out for revenge, Slappy uses his powers to raise an army of creatures from the exhibits. But when the museum closes, Slappy and his new friends are locked inside with Arragatis, an ancient mummy with his own plan for revenge. It's dummy versus mummy as Slappy faces his most dangerous and frightening opponent yet! Can Slappy defeat this ancient adversary? Or will it be a wrap for this dummy?

R.L. Stine is the creator of the bestselling Goosebumps series, which has more than 400 million copies in print worldwide and celebrated 25 years in 2017. Goosebumps is one of the bestselling children's series of all-time and inspired a popular television show, as well as a feature film starring Jack Black that opened at #1 at the box office. His other popular children's books include the series Fear Street, Mostly Ghostly, The Nightmare Room, and Rotten School, and his picture books, with Marc Brown, The Little Shop of Monsters and Mary McScary. R.L. Stine lives in New York City. You can connect with him on Twitter at @RL_Stine or Facebook: facebook.com/rlstine. For more information, visit rlstine.com and scholastic.com/goosebumps.