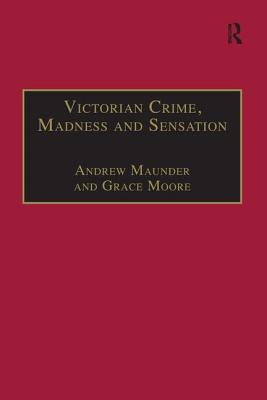 By Grace Moore (Editor), Andrew Maunder (Editor)
Ask A Bookseller For Help With This Title

Beginning with Victoria's enthronement and an exploration of sensationalist accounts of attacks on the Queen, and ending with the notorious case of a fin-de-si cle killer, Victorian Crime, Madness and Sensation throws new light on nineteenth-century attitudes toward crime and 'deviance'. The essays, which draw on both canonical and liminal texts, examine the Victorian fascination with criminal psychology and pathology, engaging with real life cases alongside fictional accounts by writers as diverse as Ainsworth, Stevenson, and Stoker. Among the topics are shifting definitions of criminality and the ways in which discourses surrounding crime changed during the nineteenth century, the literal and social criminalization of particular sex acts, and the gendering of degeneration and insanity. As fascinated as they were with criminality, the Victorians were equally concerned with solving crime, and this collection also focuses on the forces of law enforcement and nineteenth-century attempts to read the criminal body as revealed in Victorian crime fiction and reportage. Contributors engage with the detective figure and his growing professionalization, while examining the role of science and technology - both at home and in the Empire - in solving cases.

Andrew Maunder is senior lecturer in English at the University of Hertfordshire. He has written on the Cornhill Magazine, Christina Rossetti, Anthony Trollope and Mrs. Henry Wood. At present he is working on a study of Bram Stoker. Grace Moore is Lecturer in Literary Studies at the University of Melbourne, Australia. She wrote Dickens and Empire, also published by Ashgate.