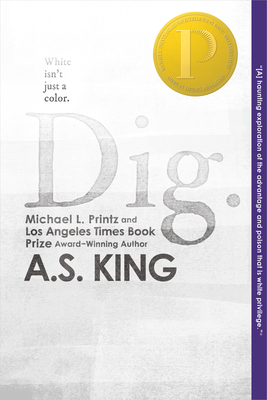 ★“King’s narrative concerns are racism, patriarchy, colonialism, white privilege, and the ingrained systems that perpetuate them. . . . [Dig] will speak profoundly to a generation of young people who are waking up to the societal sins of the past and working toward a more equitable future.”—Horn Book, starred review

“I’ve never understood white people who can’t admit they’re white. I mean, white isn’t just a color. And maybe that’s the problem for them. White is a passport. It’s a ticket.”

Five estranged cousins are lost in a maze of their family’s tangled secrets. Their grandparents, former potato farmers Gottfried and Marla Hemmings, managed to trade digging spuds for developing subdivisions and now they sit atop a million-dollar bank account—wealth they’ve refused to pass on to their adult children or their five teenage grandchildren. “Because we want them to thrive,” Marla always says.

But for the Hemmings cousins, “thriving” feels a lot like slowly dying of a poison they started taking the moment they were born. As the rot beneath the surface of the Hemmings’ white suburban respectability destroys the family from within, the cousins find their ways back to one another, just in time to uncover the terrible cost of maintaining the family name.

With her inimitable surrealism, award winner A.S. King exposes how a toxic culture of polite white supremacy tears a family apart and how one determined generation can dig its way out.

A.S. King is the acclaimed author of many acclaimed books for young readers. Her novel Dig won the 2020 Michael L. Printz Award, and Ask The Passengers won the 2013 Los Angeles Times Book Prize. The New York Times called her “one of the best YA writers working today.” King lives with her family in Pennsylvania, where she returned after living on a farm and teaching adult literacy in Ireland for more than a decade. www.as-king.com

Winner of the 2020 Michael L. Printz Medal
A Finalist for the 2020 Los Angeles Times Book Prize

"A.S. King challenges readers from the first page to the last. Dig will make you question the confines of your comfort zone—if you have one. An incredible addition to an already impressive body of work."—Erin Entrada Kelly, New York Times bestselling author and Newbery medalist

“King’s fierce empathy for young people is evident throughout, matched by her gift for a brand of weirdness that somehow manages to capture the intensity, wonder and pain of being alive. Anyone who thinks YA books can’t also be great literature needs to read this author.”—Irish Times

★ "[King's] trademark surrealism and trenchant prose will speak profoundly to a generation of young people who are waking up to the societal sins of the past and working toward a more equitable future.”—The Horn Book, starred review

★ "This visceral examination of humanity’s flaws and complexity […] cultivates hope in a younger generation that’s wiser and stronger than its predecessors.”—Booklist, starred review

★ “[P]urely mesmerizing ... the most haunting exploration in youth literature to date of the advantage and poison that is white privilege, and the resentment of young people at the toxicity of what they inherit. King fans know to expect the unexpected, and they’ll be richly rewarded with this intricate, heartfelt, readable concoction.“ —BCCB, starred review

★ "Sometimes, once you start digging, you find the poisonous parts, but you also find the fruit that will keep you alive."—SLC, starred review

★ "This combination of masterly storytelling, memorable characters, and unexpected twists and turns make this book into an unforgettable, lingering read."–SLJ, starred review

“[This] strange and heart-wrenching tale is stunningly original.”—Kirkus

“[P]rofound ... offers hope that at least some of these characters will dig themselves out from under the legacy of hate they have unwillingly inherited.”—Publishers Weekly

"This is one of the best written, most memorable young adult novels I’ve ever read. It’s that good."—Richie's Picks

"No apologies necessary. Dig is writing at its finest."—Book and Film Globe

"There is no other writer like her. She has the power to astonish like a natural wonder. And her books—the raw honesty, beauty, and singular strangeness of them—make me feel less alone in the world."—Martha Brockenbrough, author of The Game of Love and Death