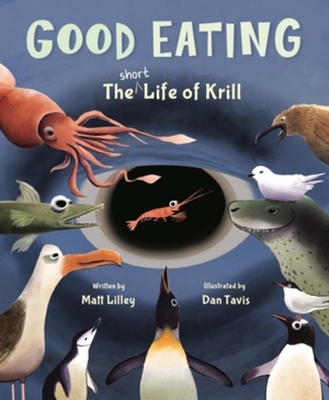 "To my delight, your average krill is a far stranger story of metamorphosis than anything our butterflies can come up with." - Elizabeth Bird, A Fuse 8 Production

Just 2 inches long full-grown, this little guy is the foundation of the Southern Ocean food chain... “Hi. What are you? You appear to be an egg. You are an egg sinking. For many days, you sink. You sink a mile down, and you keep sinking down… down… until…”

The unidentified narrator follows one krill among billions as it pursues its brief existence, eating and eating while metamorphosing from one thing into another and trying to avoid being eaten. Questions and advice are hurled at the krill on every page, but the krill never responds—because, after all, krill can’t talk, and this is nonfiction.  Krill are the largest animals able to catch and eat phytoplankton, and they in turn are eaten by the largest animals ever to live on earth—blue whales—as well as by seals, penguins, and a host of others. In other words, krill are really good at eating, and they make really good eating. And that makes them the most important animals in the high-latitude oceans.  As in The Whale Fall Café, Dan Tavis’s illustrations combine scientific accuracy with Nemo liveliness and humor. Our star krill is so good at gobbling up phytoplankton that he turns green, so we can pick him out from the crowd racing to escape a penguin’s beak or a blue whale’s gaping maw. The book has been reviewed and endorsed by global krill expert Dr. Stephen Nichol, and the manuscript earned an honorable mention in Minnesota’s McKnight Artist Fellowships for Writers. Helpful backmatter is included.

Matt Lilley (Minneapolis, MN) has a master’s degree in scientific and technical communication with a special emphasis on medical writing for kids. A technical writer by day and a children’s nonfiction book author by night, he finds that the night work is harder because it requires making complicated topics interesting as well as easy to understand. He is a Minnesota Master Naturalist and likes writing about science and nature as well as medicine. His previous children’s books include Why We Love and Why We Cry (Capstone) and Canada Geese and Beavers (in ABDO’s “Pond Animals” series).

Dan Tavis has been doodling since his first math class in elementary school and was inspired to paint upon discovering Bill Watterson’s Calvin and Hobbes comic strip. Watterson’s work remains a major influence. Dan is the illustrator of Common Critters (2020), The Whale Fall Café(2021), and Fluffy McWhiskers and the Cuteness Explosion (2021) and indulges his passion to illustrate characters that emotionally connect with the viewer and tell stories through visual narrative. Dan creates illustrations with watercolor, ink, and digital media.

[Good Eating] follows the ever-popular (to predators, anyway) Antarctic krill from blobby egg to shrimplike maturity, where they are surrounded by “krillions” of fellow crustaceans and not a few hungry-looking seals, penguins, whales, and fish. Lilley makes jocular observations (“You look kind of buggy, but you’re not a bug. / You look kind of shrimpy, but you’re not a shrimp.”) and comments on successive growth stages, bioluminescence, and this keystone species’ role in the Southern Ocean’s food chain.
— John Peters - Booklist

And just in case you're wondering how many millions and millions of krill there are in the world... Author Matt Lilley says there are a KRILLION!...The back matter, which includes more wonderful illustrations, explains the life cycle of krill and how these tiny creatures are the "keystone species of the Southern Ocean." The author discusses how krill move and can even "molt and bolt"--shedding their skin when a predator is near--and swim away!

My true appreciation of a work of nonfiction for younger readers never burns brighter than when I am able to take a book, look it right in the eye, and say, “GAAAAHHH! NATURE IS SO WEIRD!!!” And friends, I am delighted to say that this little book by Lilley and Tavis, gave me that warm panicked feeling in my belly I always strive to find. Yes, this is a book about krill. If you’re an adult like myself then you may know roundabout two facts about krill: 1. They are important to the oceans from an environmental standpoint and 2. Whales eat them by the truckload but they’re small. Therein begins and ends what I knew about the little buggers. That is also why I found GOOD EATING to be so delightful. Because Matt Lilley does not begin where you might expect him to. He starts with a shot of a single, solitary egg. “Hey, egg. What are you doing? Are you sinking?” Painted a luminous golden brown against a sea of black, the egg sinks down, more than a mile. Yet when it hatches it’s still spherical. To my delight, your average krill is a far stranger story of metamorphosis than anything our butterflies can come up with. Constantly grown and shedding and grown and shedding (and not, for quite some time, eating) krill are shapeshifters. Even when they reach their final state, they’re still shedding armor. This deep dive into the microcosm of their lives is as elucidating as it is mesmerizing. You’ll never think about them the same way again.
— Elizabeth Bird - SLJ - A Fuse 8 Production

While I had a vague sense about what krill were, I hadn't really thought about what an important part they play in the ecosystem. Lilley starts from the beginning of a krill's life cycle, and follows as one small egg sinks to the bottom of the ocean, starts to develop, and goes through the various stages to become a small ocean creature. Krill eat a LOT, and we see how krill turn green when they eat a lot of plant material. They continue to grow and eat even more, and come into contact with a variety of ocean creatures. Of course, it soon becomes apparent that krill are going to be eaten themselves, but the particular one we are following manages to escape the whale at the end and can keep up his gobbling ways for a little while longer.

There is a lot of humor to go along with the scientific language; we see what krill look like during the phases of their development, and the names are those phases appear in the corner of the pages complete with pronunciation. This makes it great for a classroom read aloud, because the text addresses one krill as "you" and makes the tiny, anonymous animals seem sympathetic. We follow our krill and root for its growth, but also hope that our krill won't end up as someone else's dinner... at least not too soon!

The illustrations are very detailed, and give a good sense for the changes the animals goes through, and also what the environment in which it lives is like. Since a lot of the krill's life is spent underwater, many of the pages have backgrounds in dark colors, with text in white or beige. The illustrations make good use of the entire spread, with some fun borders showing sea vegetation or other details. It's good to see more informational text for young readers, especially when they have fantastic end papers-- this one has two solid pages of tiny krill that made me think that maybe one of them was wearing a striped shirt like Waldo!