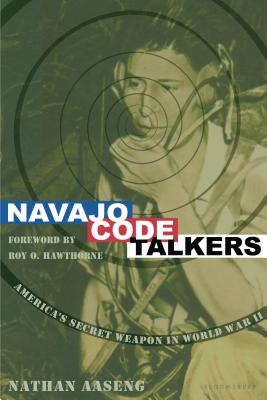 Navajo Code Talkers tells the story of this special group, who proved themselves to be among the bravest, most valuable, and most loyal of American soldiers during World War II.

On the Pacific front during World War II, strange messages were picked up by American and Japanese forces on land and at sea. The messages were totally unintelligible to everyone except a small select group within the Marine Corps: the Navajo code talkers-a group of Navajos communicating in a code based on the Navajo language. This code, the first unbreakable one in U.S. history, was a key reason that the Allies were able to win in the Pacific.

Nathan Aaseng grew up in Minnesota and worked as a microbiologist for four years before becoming a writer. He has written over ninety books for young readers. He lives in Eau Claire, Wisconsin, with his wife, Linda, and their four children.

“Few books so concisely summarize the Japanese advance and the American response to it, while none provides the same depth of insight into the conditions faced by these Navajo. . . . An important story, compellingly told.” —Kirkus (pointer review)

“A fascinating account that sheds light on a little-known contribution of the Navajos during World War II.” —School Library Journal