The Other Brain: The Scientific and Medical Breakthroughs That Will Heal Our Brains and Revolutionize Our Health (Paperback) 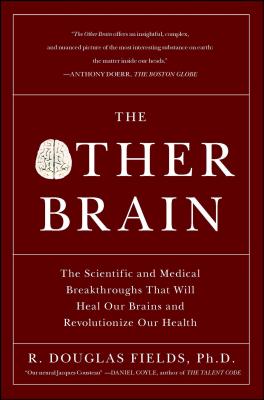 Despite everything that has been written about the brain, a potentially critical part of this vital organ has been overlooked—until now. The Other Brain examines the growing importance of glia, which make up approximately 85 percent of the cells in the brain, and the role they play in how the brain functions, malfunctions, and heals itself.

Long neglected as little more than cerebral packing material, glia (meaning “glue”) are now known to regulate the flow of information between neurons and to repair the brain and spinal cord after injury and stroke. But scientists are also discovering that diseased and damaged glia play a significant role in psychiatric illnesses such as schizophrenia and depression, and in neurodegenerative diseases such as Parkinson’s and Alzheimer’s. Diseased glia cause brain cancer and multiple sclerosis and are linked to infectious diseases such as HIV and prion disease (mad cow disease, for example) and to chronic pain. The more we learn about these cells that make up the “other” brain, the more important they seem to be.

Written by a neuroscientist who is a leader in glial research, The Other Brain gives readers a much more complete understanding of how the brain works and an intriguing look at potentially revolutionary developments in brain science and medicine.

Fields has conducted postdoctoral research at Stanford University, Yale University, and the NIH. He became Head of the Neurocytology and Physiology Unit, NICHD in 1994, and Chief of the Nervous System Development and Plasticity Section, NICHD in 2001. He is Editor-in-Chief of the journal Neuron Glia Biology, and member of the editorial board of several other journals in the field of neuroscience. He lives in Silver Spring, Maryland.

“The Other Brain offers an insightful, complex, and nuanced picture of the most interesting substance on earth: the matter inside our heads.”
—Anthony Doerr, The Boston Globe