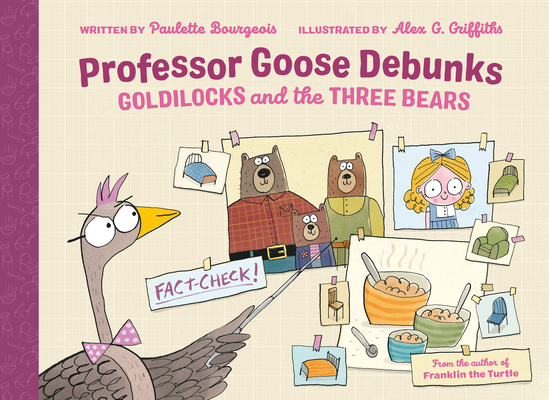 The first in a new series by the author of Franklin the Turtle! Join Professor Goose in this STEM-filled picture book as she fact-checks classic fairy tales and shares the science behind these flawed stories.

Mother Goose's fairy tales are NOT based in science, and her great niece Professor Goose thinks it's time to share the truth. Join Professor Goose as she — literally — travels through the pages of Goldilocks and the Three Bears, fact-checking, exposing the flaws and explaining the science. Bears don't live in cottages — they prefer dens! The smallest bowl of porridge wouldn't be "just right" — it would have been the coldest! Professor Goose is delighted to see Baby Bear use the scientific method and Goldilocks's fight or flight response. And maybe Goldilocks should have used a GPS so she wouldn't have gotten lost in the first place?

Jammed with jokes and wonderfully silly illustrations, this book entertains while it introduces basic scientific laws and rules to young readers. At the back of the book, readers will find Professor Goose's  instructions on how to engineer their own chair for a (teddy) bear!

PAULETTE BOURGEOIS is best known for creating Franklin the Turtle, the character who appears in the bestselling picture books illustrated by Brenda Clark. The series has been translated into thirty-eight languages and adapted into an animated television series, merchandise and feature-length films. She is also the author of award-winning books for children including Oma's Quilt which was developed as a short film by the National Film Board of Canada, and more than two dozen non-fiction science books. She is a member of the Order of Canada, received an honorary doctorate degree from Western University, an award of merit from the Canadian Association of Occupational Therapists and most recently graduated with an M.F.A. in Creative Writing from the University of British Columbia. Paulette frequently teaches and she has been the writer-in-residence at UBC, Whistler, BC, and Terra Nova National Park, Newfoundland.

ALEX G. GRIFFITHS is a children's book illustrator originally from London, UK. The majority of his work is done by hand, using a combination of pen and ink line work and brush textures in a messy way to create an unusual illustration style. He now lives in Canada with his wife and two children.

"This imaginative book is perfect for libraries with makerspaces and strong STEM programming." —School Library Journal

"[O]ur goose guide — with notable help from Alex G. Griffiths’s brightly daffy illustrations — [offers] some enlightening fun. . . . It's never too early to teach kids to question what they read or watch." —Quill & Quire

"[A] fun and inventive way to introduce young children to STEM concepts and the scientific method . . . a promising start to an entertaining new picture book series." —CM Reviews