A Life Electric: The Story of Nikola Tesla (Hardcover) 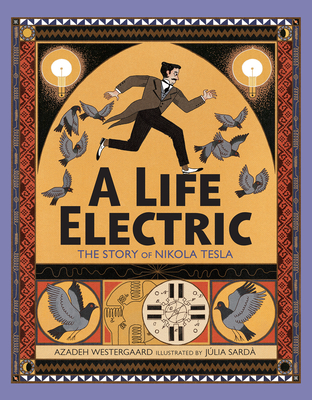 A lyrical biography of the eccentric engineer and inventor Nikola Tesla

“An elegant and enlightening look at a man who brightened the whole world.” –Booklist, starred review

Born at the stroke of midnight during a lightning storm, Nikola Tesla grew up to become one of the most important electrical inventors in the world. But before working with electricity, he was a child who loved playing with the animals on his family's farm in Serbia.

An inventor since childhood, Tesla's patents encompassed everything from radar and remote-control technology to wireless communications. But his greatest invention was the AC induction motor, which used alternating currents ( AC) to distribute electricity and which remains the standard for electric distribution today. Tesla's love of animals also remained constant throughout his life and led to his anointment as the Pigeon Charmer of New York for his devotion to nature's original wireless messengers.

Exploring his groundbreaking inventions against the backdrop of his private life, A Life Electric introduces Nikola Tesla to young readers unlike ever before. Azadeh Westergaard's lyrical debut brings compassion and humanity to the legacy of the brilliant inventor, while the esteemed illustrator Júlia Sardà deftly brings him to life.

Azadeh Westergaard received her BA from Harvard College and MFA from Vermont College of Fine Arts. A Life Electric is her picture book debut. The daughter of an electrical engineer and originally from Iran, she grew up in the United States and now lives in New York City with her husband and three boys. Visit her at ahwestergaard.com.

Júlia Sardà is an artist who has illustrated many books for children, including The Liszts by Kyo Maclear and Mary Who Wrote Frankenstein by Linda Bailey. Her work has been published around the world in many languages. She lives in Barcelona, Spain.

“An elegant and enlightening look at a man who brightened the whole world.” –Booklist, starred review

“A portrait of the remarkable inventor as inquisitive, clever, and kindhearted. A fine introduction, handsomely illustrated.” –Kirkus Reviews

“For both pleasure reading and report writing, this is a worthy introduction to a brilliant scientist whose contributions have often been overshadowed by the better-known Thomas Edison.” –School Library Journal