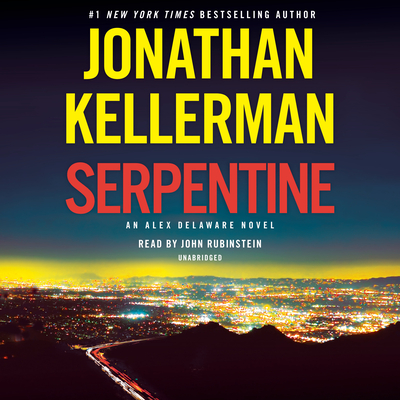 By Jonathan Kellerman, John Rubinstein (Read by)
$57.15
Ask A Bookseller For Help With This Title

This is book number 36 in the Alex Delaware series.

NEW YORK TIMES BESTSELLER • Psychologist Alex Delaware and detective Milo Sturgis search for answers to a brutal, decades-old crime in this electrifying psychological thriller from the master of suspense.

LAPD homicide lieutenant Milo Sturgis is a master detective. He has a near-perfect solve rate and he’s written his own rule book. Some of those successes—the toughest ones—have involved his best friend, the brilliant psychologist Alex Delaware. But Milo doesn’t call Alex in unless cases are “different.”
This murder warrants an immediate call. Milo’s independence has been compromised as never before, as the department pressures him to cater to the demands of a mogul: a hard-to-fathom, megarich young woman who is obsessed with reopening the coldest of cases—the decades-old death of the mother she never knew.

The facts describe a likely loser: a mysterious woman found with a bullet in her head in a torched Cadillac that has overturned on infamously treacherous Mulholland Drive. No physical evidence, no witnesses, no apparent motive. And a slew of detectives have already worked the case and failed. But as Delaware and Sturgis begin digging, the mist begins to lift. Too many coincidences. Facts turn out to be anything but. And as they soon discover, very real threats lurking in the present.

This is Delaware/Sturgis at their best: traversing the beautiful but forbidding place known as Los Angeles and exhuming the past in order to bring a vicious killer to justice.

Jonathan Kellerman is the #1 New York Times bestselling author of more than forty crime novels, including the Alex Delaware series, The Butcher's Theater, Billy Straight, The Conspiracy Club, Twisted, True Detectives, and The Murderer's Daughter. With his wife, bestselling novelist Faye Kellerman, he co-authored Double Homicide and Capital Crimes. With his son, bestselling novelist Jesse Kellerman, he co-authored A Measure of Darkness, Crime Scene, The Golem of Hollywood, and The Golem of Paris. He is the author of two children's books and numerous nonfiction works, including Savage Spawn: Reflections on Violent Children and With Strings Attached: The Art and Beauty of Vintage Guitars. He has won the Goldwyn, Edgar, and Anthony awards and the Lifetime Achievement Award from the American Psychological Association, and has been nominated for a Shamus Award. Jonathan and Faye Kellerman live in California and New Mexico.