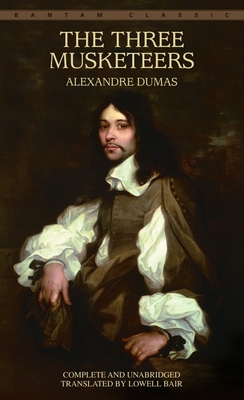 Perhaps the greatest “cloak and sword” story ever written, The Three Musketeers, first published ion 1844, is a tale for all time. Pitting the heroic young d’Artagnan and his noble compatriots, Athos, Porthos, and Aramis against the master of intrigue, Cardinal Richelieu, and the quintessential wicked woman, Lady de Winter, Alexandre Dumas has created an enchanted France of swordplay, schemes and assignations. The era and the characters are based on historical fact, but the glittering romance and fast-paced action spring from a great writer’s incomparable imagination. From the perilous retrieval of the queens gift to her lover in time to foil Rechelieu’s plot to the melodramatic revelation of Lady de Winter’s true identity, The Three Musketeers is the unchallenged archetype for literary romance and a perennial delight for generations of readers.

Alexandre Dumas (père) lived a life as romantic as that depicted in his famous novels. He was born on July 24,1802, at Villers-Cotterêts, France, the son of Napoleon’s famous mulatto general, Dumas, His early education was scanty, but his beautiful handwriting secured him a position in Paris in 1822 with the du’Orléans, where he read voraciously and began to write. His first play, Henri III et sa cour (1829), scored a resounding success for its author and for the romantic movement. Numerous dramatic successes followed (including the melodrama Kean , later adapted by Jean-Paul Satre), and so did numerous mistresses and adventures. He took part in the revolution of 1830 and caught cholera during the epidemic of 1832, fathered two illegitimate children by two different mistresses, and then married still another mistress. (The first of these two children, Alexandre Dumas, [fils], became a famous author also,) His lavish spending and flamboyant habits led to the construction of his fabulous Château de Monte-Christo, and in 1851 he fled to Belgium to escape creditors. He died on December 5, 1870, bankrupt but still cheerful, saying of death, “I shall tell her a story, and she will be kind to me.”

Dumas’s overall literary output reached over 277 volumes, but his brilliant historical novels made him the most universally read of all French novelists. With collaborators, mainly Auguste Maquet, Dumas wrote such works as The Three Musketeer (1843-44); its sequels, Twenty Years After (1845) and the great mystery The Man in the Iron Mask (1845-50); and The Count of Monte Cristo (1844). L’action and l’amour were the two essential things in life and his fiction. He declared he “elevated history to the dignity of the novel” by means of love affairs, intrigues, imprisonments, hairbreadth escapes, and duels. His work ignored historical accuracy, Psychology, and analysis, but its thrilling adventure and exuberant inventiveness continue to delight readers, and Dumas remains one of the prodigies of nineteenth-century French literature.

"I do not say there is no character as well-drawn in Shakespeare [as D'Artagnan]. I do say there is none that I love so wholly."
—Robert Louis Stevenson