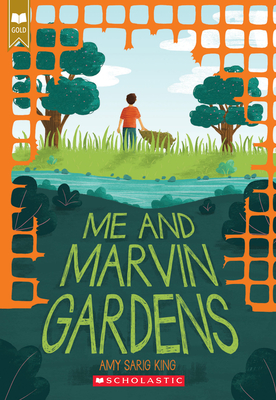 Obe Devlin has problems. His family's farmland has been taken over by developers. His best friend Tommy has abandoned him. And he keeps getting nosebleeds, because of that thing he doesn't like to talk about. So Obe hangs out at the nearby creek, in the last wild patch left, picking up trash and looking for animal tracks.

One day, he sees a creature that looks kind of like a large dog. And as he watches it, he realizes it eats plastic. Only plastic. Water bottles, shopping bags... No one has seen a creature like this before. The animal--Marvin Gardens--becomes Obe's best friend and biggest secret. But to keep him safe, Obe must make a decision that might change everything.

Amy Sarig King is the author of Me and Marvin Gardens, a Washington Post Best Book of the Year. She has also published many critically acclaimed young adult novels under the name A. S. King, including Please Ignore Vera Dietz, which was named a Michael L. Printz Honor Book, and Ask the Passengers, which won the Los Angeles Times Book Prize. After many years farming abroad, she now lives back in southeastern Pennsylvania, with her family. Visit her website at www.as-king.com and follow her on Twitter at @AS_King.

Praise for Me and Marvin Gardens:

"A provocative exploration of human action and interaction on both local and global levels, as well as the interplay between past, present, and future, King's novel will leave readers pondering how we treat each other and the planet. " -- Publishers Weekly, starred review

"A smart, environmentally conscious underdog story with a lot of heart.... The characters are rewardingly complex. Through Obe, King asks the Big Questions alongside the smaller, more personal ones in a way that will likely have readers doing the same." -- The Horn Book Magazine, starred review

"A coming-of-age novel with a fully developed and authentic protagonist. An emotionally rich read for a wide audience, especially those interested in keeping the planet alive and well for future generations." -- School Library Journal, starred review

"Mystical, fablelike... just right for a sensitive sixth-grader with a growing self- and world awareness trying to navigate the troubled waters of uncertain friendships and demeaning bullying. A finely wrought, magical coming-of-age tale with a convincing message." -- Kirkus Reviews

"This is acclaimed YA author King's first foray into middle-grade territory, and it's no surprise that she adeptly handles issues like bullying, compromised friendship, complex family dynamics, and the tedium of homework... Drawing upon the tradition of Carl Hiaasen's Hoot (2002), this eco-focused story will tug at readers' consciences and heartstrings." -- Booklist