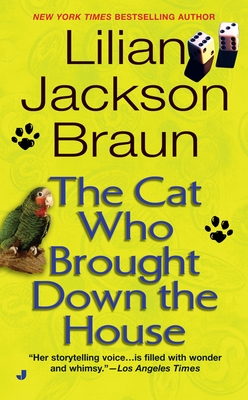 Siamese cat Koko’s stage debut is postponed when Jim Qwilleran suspects the feline’s costar may be guilty of murder in this Cat Who mystery—the 25th in the New York Times bestselling series!

Jim Qwilleran lives in Pickax, a small town 400 miles north of everywhere, and writes for a small newspaper. He stands tall and straight. He dates a librarian. His roommates are two abandoned cats that he adopted along the way, one of them quite remarkable. Qwilleran has a secret that he shares with no one—or hardly anyone. His male cat, Koko, has an uncanny intuition that can tell right from wrong and frequently sniffs out the evildoer...

Retiring in Pickax, actress Thelma Thackeray has decided to start a film club and organize a fundraiser revue, starring Koko the cat. But Thelma's celebrated arrival takes an unpleasant turn when the strange circumstances of her twin brother's recent death seem suspicious to Jim Qwilleran. Qwill needs a helping paw in this case. But will Koko deign to take time from his stage debut?