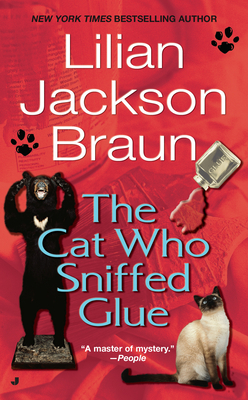 This is book number 8 in the Cat Who... series.

When his cat Koko develops an odd obsession, Jim Qwilleran will have to sniff out the cause in this mystery in the New York Times bestselling Cat Who series.

Having inherited millions, Jim Qwilleran and his two feline companions, Koko and Yum Yum, are preparing to settle down into a life of purrfect luxury in Pickax. That is, until the son of a rich banker and his wife are found murdered. To the police it looks like a robbery gone awry. But then Koko develops an odd appetite for glue. Qwill doesn’t spot the clue until his beloved Siamese’s taste for paste tangles them in a web of love, danger, and their stickiest case yet!