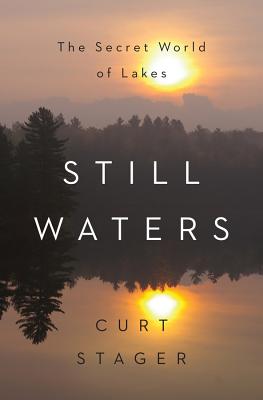 A fascinating exploration of lakes around the world, from Walden Pond to the Dead Sea.

More than a century and a half have passed since Walden was first published, and the world is now a very different place. Lakes are changing rapidly, not because we are separate from nature but because we are so much a part of it. While many of our effects on the natural world today are new, from climate change to nuclear fallout, our connections to it are ancient, as core samples from lake beds reveal. In Still Waters, Curt Stager introduces us to the secret worlds hidden beneath the surfaces of our most remarkable lakes, leading us on a journey from the pristine waters of the Adirondack Mountains to the wilds of Siberia, from Thoreau’s cherished pond to the Sea of Galilee.

Through decades of firsthand investigations, Stager examines the significance of our impacts on some of the world’s most iconic inland waters. Along the way he discovers the stories these lakes contain about us, including our loftiest philosophical ambitions and our deepest myths. For him, lakes are not only mirrors reflecting our place in the natural world but also windows into our history, culture, and the primal connections we share with all life.

Beautifully observed and eloquently written, Stager’s narrative is filled with strange and enchanting details about these submerged worlds—diving insects chirping underwater like crickets, African crater lakes that explode, and the growing threats to some of our most precious bodies of water. Modern science has demonstrated that humanity is an integral part of nature on this planet, so intertwined with it that we have also become an increasingly powerful force of nature in our own right. Still Waters reminds us how beautiful, complex, and vulnerable our lakes are, and how, more than ever, it is essential to protect them.

Curt Stager is a professor of natural sciences at Paul Smith’s College in New York. New York State’s Carnegie-Case Science Professor of the Year in 2013, he cohosts Natural Selections on North Country Public Radio and has published in periodicals such as Science, National Geographic, and The New York Times.

Curt Stager is as fine a teacher as I have ever encountered, both in the classroom and on the page. You will learn something new in every paragraph of this book, and the vivid writing will make it stick in your brain. For those of us who love the planet's lakes, this is like a long, cool drink of the freshest water.
— Bill McKibben, author of Falter

Curt Stager is an eloquent storyteller. He not only guides us into the fascinating ecological worlds that dwell within lakes but also demonstrates that our own nature, both biological and cultural, cannot be understood apart from our many interconnections with these living waters.
— David George Haskell, author of The Songs of Trees and The Forest Unseen

Lakes reflect us both literally and metaphorically, in ways shallow and deep. We can see our faces as we peer into their surface. But more deeply, lakes also reflect how the world is changing. Curt Stager has written a deep book about lakes. He peers into deep time, letting lakes tell us what has been, as well as foretelling a bit about who we are becoming.
— Carl Safina, author of A Sea In Flames and Beyond Worlds: What Animals Think and Feel

Curt Stager takes his readers into the depths of ponds, lakes and seas around the globe—both polluted and pristine, ancient and nearly new—and brings alive the universe of life contained within each. Picking up the torch lit by Thoreau more than 150 years ago, Still Waters plumbs a question that vexes ecologists and philosophers alike—Can waters so shaped by human hands ever again be considered 'natural'? His conclusions will surprise as much as they entertain and educate.

— Dan Egan, author of The Death and Life of the Great Lakes

An outstanding work of nature and science writing that lingers long after the book is closed. Highly recommended.
— Library Journal (starred review)

This contemplative volume, both informative and poetic, makes good on Stager's intent to 'upgrade' Walden 'for our own century.'

Authoritative.... For a primer on the ‘secret world’ of lakes and for surprising facts and speculations on the microscopic and macroscopic realms—all carefully assembled and presented—the book is an important contribution to understanding how lakes, beyond their singular beauty, are windows to our primal connections to all life.
— Kirkus