Borges and Me: An Encounter (Hardcover) 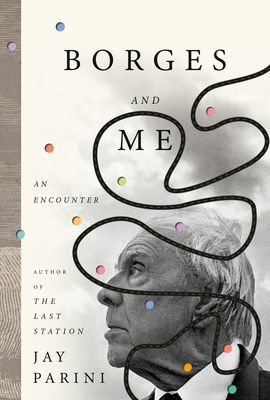 By Jay Parini
$27.95
Ask A Bookseller For Help With This Title

In this evocative work of what the author in his afterword calls “a kindof novelistic memoir,” Jay Parini takes us back fifty years, when he fled the United States for Scotland—in flight from the Vietnam War and desperately in search of his adult life. There, through unlikely circumstances, he meets the famed Argentinian author Jorge Luis Borges.

Borges—visiting his translator in Scotland—is in his seventies, blind and frail. When Borges hears that Parini owns a 1957 Morris Minor, he declares a long-held wish to visit the Highlands, where he hopes to meet a man in Inverness who is interested in Anglo-Saxon riddles. As they travel, stopping at various sites of historical interest, the charmingly garrulous Borges takes Parini on a grand tour of Western literature and ideas, while promising to teach him about love and poetry. As Borges’s idiosyncratic world of labyrinths, mirrors, and doubles shimmers into being, their escapades take a surreal turn.

Borges and Me is a classic road novel, based on true events. It’s also a magical mystery tour of an era, like our own, in which uncertainties abound, and when—as ever—it’s the young and the old who hear voices and dream dreams.

Jay Parini is a poet, novelist, and biographer who teaches at Middlebury College. He has written eight novels, including The Damascus Road, Benjamin’s Crossing, The Apprentice Lover, The Passages of H.M., and The Last Station, the last made into an Academy Award–nominated film. His biographical subjects include John Steinbeck, Robert Frost, William Faulkner, and, most recently, Gore Vidal. His nonfiction works include Jesus: The Human Face of God, Why Poetry Matters, and Promised Land: Thirteen Books That Changed America.

“This reminiscence by Parini, who is now a prolific novelist, biographer and poet, brings Borges more sharply to life than any account I’ve read or heard. . .In this sense, the memoir is an important contribution to the biography of a major writer. . .For readers who already admire Borges, this memoir will be a delicious treat. For those who have yet to read him, Parini provides the perfect entry point to a writer who altered the way many think of literature.” —Michael Greenberg, The New York Times Book Review

"A classic comic-philosophical road story, playfully conscious of its own traditions. . .Many of the book’s loveliest passages are pure geography; as he drives, Jay describes to Borges the passing landscapes of Scotland, to which Borges adds literary and historical context. The pressure to capture Scotland in words for the great Jorge Luis Borges forces Jay to think about language in a new way, to “up his game” as a poet, and this artistic journey, occurring alongside their physical journey, becomes the book’s emotional backbone. . .A fun, tightly crafted, tenderhearted literary adventure, an improbable tale that, like many improbable tales, happens to be true." —Martin Riker, The Wall Street Journal

“This is a jewel of a book. Very funny, clever, moving, luminous with love of literature and landscape. Jay Parini’s portrait of both Borges and Scotland is exquisite, deeply affectionate, sometimes comically irritable. He uses all a novelist’s art, all his smoke and mirrors, to let the great man step shambolically from these pages to trap and beguile us, like a modern Ancient Mariner, with his brilliant, freely associative and heady metaphysics and literary table talk. And all his constant demands. My laughter (at poor Parini’s long night in bed with his subject) kept my wife awake. But by the end, I was damp around the eyes; I was sad to let this little cast of characters go. . . I read it in a greedy gulp.” —Ian McEwan

"Borges and Me is a road trip book like no other, written by someone who certainly didn't spend his youth the way I did. I loved every minute of reading it. It's full of wonderful energy and humor, with underpinnings of sadness and seriousness I can't shake." —Ann Beattie

"A tender bond forms between the eccentric sage and his caretaker. . .Fans of both Borges and Parini will delight in this touching coming-of-age memoir. —Publishers Weekly, starred review