Everything I Need I Get from You: How Fangirls Created the Internet as We Know It (Paperback) 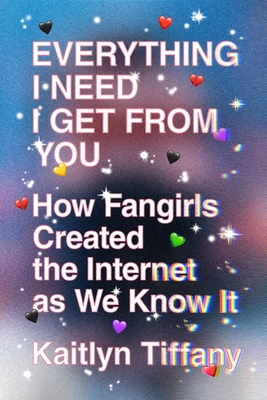 "On the internet, fandom can be a route toward cyberbullying a baby, or it can be a way of figuring some things out about yourself. Sometimes, it can even forge a writer as funny and perceptive as Kaitlyn Tiffany.” —Amanda Hess, The New York Times

A thrilling dive into the world of superfandom and the fangirls who shaped the social internet.

In 2014, on the side of a Los Angeles freeway, a One Direction fan erected a shrine in the spot where, a few hours earlier, Harry Styles had vomited. “It’s interesting for sure,” Styles said later, adding, “a little niche, maybe.” But what seemed niche to Styles was actually a signpost for an unfathomably large, hyper-connected alternate universe: stan culture.

In Everything I Need I Get from You, Kaitlyn Tiffany, a staff writer at The Atlantic and a superfan herself, guides us through the online world of fans, stans, and boybands. Along the way we meet girls who damage their lungs from screaming too loud, fans rallying together to manipulate chart numbers using complex digital subversion, and an underworld of inside jokes and shared memories surrounding band members' allergies, internet typos, and hairstyles. In the process, Tiffany makes a convincing, and often moving, argument that fangirls, in their ingenuity and collaboration, created the social internet we know today. “Before most people were using the internet for anything,” Tiffany writes, “fans were using it for everything.”

With humor, empathy, and an insider’s eye, Everything I Need I Get from You reclaims internet history for young women, establishing fandom not as the territory of hysterical girls but as an incubator for digital innovation, art, and community. From alarming, fandom-splitting conspiracy theories about secret love and fake children, to the interplays between high and low culture and capitalism, Tiffany’s book is a riotous chronicle of the movement that changed the internet forever.

Kaitlyn Tiffany is a staff writer at The Atlantic, where she covers technology and culture. She was previously on the same beat at Vox’s consumer vertical The Goods, after starting her career writing about pop culture, fandom, and online community at The Verge. Formerly the host of the popular podcast Why’d You Push That Button, which considered the tiny technology decisions that have an outsized effect on our modern social lives, she lives in Brooklyn.

"Tiffany is at the height of her powers when she is describing, with touching specificity, why it might make sense for a person to invest serious time and money into a bunch of cute boys singing silly love songs . . . On the internet, fandom can be a route toward cyberbullying a baby, or it can be a way of figuring some things out about yourself. Sometimes, it can even forge a writer as funny and perceptive as Kaitlyn Tiffany.” —Amanda Hess, The New York Times

"Wistful, winning, and unexpectedly funny . . . Being a fan, for Tiffany, is achingly personal. I loved her musings on why and how people pledge themselves to a piece of culture, and whether that commitment changes them . . . Her book evokes the intimacy of the fan-artist relationship: how your chosen mania can become the lens through which you process the world." —Katy Waldman, The New Yorker

“Tiffany provides nuanced analysis of an often-overlooked force in internet history, one dominated by the kind of young women whom the rest of the world dismissed as little more than brainless teenyboppers.” —Rebecca Jennings, Vox

“Sharp and very funny . . . Writing as a Directioner reintegrated into civil society, moving artfully between reportage and memoir, fanspeak and critical analysis, Tiffany avoids the default condescension to which fangirls are often subjected and takes their exploits seriously, teasing out the relationship of fandom to both individual identity and online community.” —Jake Nevins, Gawker

"[Everything I Get I Need from You is] on the one hand, elegantly written, evidence-based, and rational, and on the other, off-kilter, animated by a profound and consuming, almost manic, loneliness . . . Any niche has its cranks and tricksters, its conspiracy theorists, its dilettantes, its day ones. They’re all here—fragile and wounded and seeking something semi-seriously—and Tiffany portrays them with sensitivity and humor. I have no choice but to stan." —Erin Somers, Bookforum

"From dissecting digital trends to diving into conspiracy theories, Tiffany creates a compelling picture of the people responsible for shaping the way we communicate and interact online." —Mahita Gajanan, TIME

“What [Everything I Need I Get from You] illuminate[s] is the way a fan’s love often ignites during crises of identity . . . What you get is a reason to dance on a rooftop, and a friend who knew that was what you needed. Theirs is a fandom that almost—almost—doesn’t need a band or a movie or a TV show around which to organize.” —Laura Miller, Slate

"The book’s balance of first-person experience and scholarly analysis, humor and rigor, makes it an irresistible read." —Pitchfork

“There are two types of people: those who know what it is to be an utter, soul-level fangirl, and those who cannot comprehend the lifestyle, and both groups should read Kaitlyn Tiffany’s propulsive, entertaining study of contemporary female fan culture.” —Jenny Singer, Glamour

"[A] wonderfully fresh take on fandom . . . uses her love of One Direction ingeniously to trace how online culture came to feel." —Christopher Borrelli, Chicago Tribune

"An alluring mixture of personal anecdotes, conspiracy theory investigations, and interviews with preeminent fangirls of all stripes." —Sophie Lee, Interview

"[Tiffany] is, like an experienced anthropologist, a participant observer in this retelling of how fangirls shaped Internet culture . . . Everything I Need I Get From You‘s narratives of the history of both fandom and the Internet are thorough and readable." —Linda Levitt, Pop Matters

“It’s a rare book that can transfix me examining a topic I have almost no prior knowledge of nor any particular affection for. [Everything I Need I Get from You] takes a fascinating look at 1D’s fandom, showing paths into music appreciation I had never before considered.” —Isabelle Popp, Book Riot

“A smart, empathetic work of nonfiction that examines young women and the ways they have innovated digital spaces. With a focus on the One Direction fandom, of which she herself was a part, Atlantic writer Kaitlyn Tiffany upends our biases about fangirls and shows them as the creative, tongue-in-cheek, freethinking individuals that they are.” —Mara Sandroff, New City Lit

“An insightful, personal, and important testament to the power of fandom, and to the ways it has shaped Millennial lives and the new world of the Internet.” —Julie Phillips, Liber

"Immensely entertaining . . . Well-versed in this subsect of internet culture thanks to her own passion for One Direction . . . Tiffany remains archly self-aware throughout, assuming an alternately waggish and reverential tone that perfectly captures the absurd genius of this influential army of women. Stans will want an encore." —Publishers Weekly (starred review)

"A heartfelt memoir wrapped in an ethnographic analysis . . . Despite its focus on One Direction, the text buzzes with broader relevance that should appeal to readers interested in the ‘unlimited chaotic energy’ of life online. A finely balanced pop-culture investigation.” —Kirkus

"With her insider-outsider perspective, patience, and wit, Kaitlyn Tiffany does remarkable justice to the complexity of online culture. Everything I Need I Get From You will fascinate aficionados, but even for someone who’s never so much as logged on, it makes a rich and heartfelt explainer on the feelings and phenomena that thrive on the internet." —Jenny Odell, author of How to Do Nothing

"How often the world forgets that the things of girls populate the intellect just as thickly and freely as the things of boys. Kaitlyn Tiffany’s Everything I Need I Get From You is a brilliant demonstration of the joy, power, technological innovation and world-changing shifts that happen when girls turn on their love." —Samantha Hunt, author of The Unwritten Book

"Just when I can’t bear to read another thing about the boys who built or wrecked the Internet, Everything I Need I Get from You comes along. Kaitlyn Tiffany's book is a fresh and often funny experiment in finding forms fit to archive the websites where we became ourselves—and full, like them, of joy and awkward tenderness. As cultural history, it casts the most familiar developments in a new light. As criticism meets memoir meets performance art, it won me over like a great fan will—through sheer commitment to the bit." —Moira Weigel, author of Labor of Love

"Kaitlyn Tiffany’s Everything I Need I Get From You is a headlong plunge into fandom, which, as she deftly illustrates, is the single force that drives today’s Internet more than anything else. Tiffany shows that fandom isn’t just about consumption: It’s an all-consuming creative passion, a drive to remake culture for yourself. Tiffany is a sociologist of online niches as well as a brilliant recounter of the kind of obsessiveness that fandom thrives on, precisely because she knows the fervor herself. Everything I Need I Get From You is a perfect document of the peculiarly fruitful form of Internet-enabled obsession." —Kyle Chayka, author of The Longing for Less