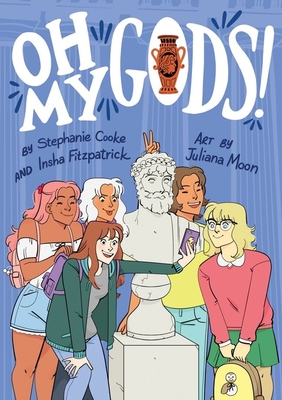 Oh My Gods!, the first in a new middle grade graphic novel series, reads as if Raina Telgemeier and Rick Riordan teamed up to write a comic, and offers a fresh and funny spin on Greek mythology. When an average girl moves to Mt. Olympus, she discovers her new classmates are gods and mythological creatures are actually real—as if junior high isn't hard enough!

Karen is just an average thirteen-year-old from New Jersey who loves to play video games with her friends and watch movies with her mom. But when she moves to Greece to live with her eccentric, mysterious father, Zed, suddenly everything she thought about herself—about life—is up in the air.

Starting a new school can be difficult, but starting school at Mt. Olympus Junior High, where students are gods and goddesses, just might take the cake. Especially when fellow classmates start getting turned to stone. Greek mythology . . . a little less myth, a little more eek! And if Karen’s classmates are immortal beings, who does that make her?

Stephanie Cooke is an award-nominated writer and editor based out of Toronto, Canada. She’s a comic book fan, avid gamer, movie watcher, lover of music… and user of sarcasm. She is a purveyor of too many projects and thrives in chaos. Her writing work is featured in Millarworld Annual, The Secret Loves of Geek Girls, and Toronto Comics Anthology. Oh My Gods! is her debut graphic novel.


Juliana Moon is a Brazilian digital artist working in comics and illustration. She is drawn to fantasy, adventures, and mystery. Her favorite things to draw are dogs and people with different backgrounds. Very inspired by anime and every animation movies/shows ever, Juliana’s art is a mixture of everything she likes. She lives in Rio de Janeiro, Brazil.

"The dialogue and characterizations are spot on and snappy. Kudos also to Juliana Moon’s cartooning. Her artwork is immensely engaging — filled with expressive, appealing faces and a wide variety of body shapes and sizes.” —New York Times Book Review   "[An] adorable father-daughter-bonding story with a twist....A fun romp with minimal drama and plenty of heart makes this a refreshing read, and a teaser ending indicates more to come."—Booklist   "A breezy tone and well-placed gags keep things moving in Cooke and Fitzpatrick’s series opener.... Instantly inviting art with strong lines and a colorful palette by Moon quickly situates the reader."—Publishers Weekly   "Sure to be a hit among readers seeking an exciting mystery with mythological flair."—School Library Journal   "Visually, Moon’s bright and expressive art propels Cooke and Fitzpatrick’s narrative, with tidy stylization and an alluring full-color palette....Intriguing." —Kirkus —