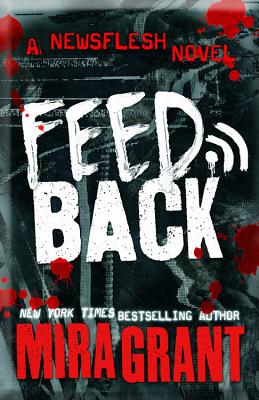 By Mira Grant
$12.69
Ask A Bookseller For Help With This Title

This is book number 4 in the Newsflesh series.

Feedback is a full-length Newsflesh novel that overlaps the events of the acclaimed first novel in the series, Feed, and offers a new entry point to this thrilling and treacherous world from New York Times bestseller Mira Grant.

There are two sides to every story. . .

We had cured cancer. We had beaten the common cold. But in doing so we unleashed something horrifying and unstoppable. The infection spread leaving those afflicted with a single uncontrollable impulse: FEED.

Now, twenty years after the Rising, a team of scrappy underdog reporters relentlessly pursue the facts while competing against the brother-and-sister blog superstars, the Masons.

Surrounded by the infected, and facing more insidious forces working in the shadows, they must hit the presidential campaign trail and uncover dangerous truths. Or die trying.


Praise for Feed:
"It's a novel with as much brains as heart, and both are filling and delicious."―The A. V. Club

"Gripping, thrilling, and brutal... McGuire has crafted a masterpiece of suspense with engaging, appealing characters who conduct a soul-shredding examination of what's true and what's reported."―Publishers Weekly (Starred Review)

“Feed is a proper thriller with zombies.” —SFX

Mira Grant lives in California, sleeps with a machete under her bed, and highly suggests you do the same. Mira Grant is the pseudonym of Seanan McGuire -- winner of the 2010 John W. Campbell Award for best new writer. Find out more about the author at www.miragrant.com or follow her on twitter @seananmcguire.

"A U.S. presidential campaign set in a zombie-infested future bears an eerie resemblance to the way we live now. Simply jump in and enjoy ... a whip-smart thriller overflowing with sharp ideas and social commentary."—Kirkus (starred review) on Feedback

"The strength of this tale lies in the diverse cast, their deep ties to one another, and Grant's ability to surprise the reader with emotional gut punches."—Publishers Weekly on Feedback

"Grant excels at writing complicated personalities participating in complicated relationships, and this is no exception."—Booklist on Feedback

"Astonishing ... a fascinating exploration of the future."—New York Times on Newsflesh series

"While there's plenty of zombie mayhem, political snark, and pointedly funny observations here, the heart of this book is about human relationships, which are still the most important thing in the world...even in a world where you might have to shoot the person you love most in the head, just to stop them from biting off your face."—Locus on Feed

"Feed is a proper thriller with zombies. Grant doesn't get carried away with describing her world or the virus. She's clearly thought both out brilliantly, but she doesn't let it get in the way of a taut, well written story."—SFX on Feed

"The story starts with a bang as corruption, mystery, danger and excitement abound."—RT Book Reviews (4.5 stars) on Feed

"Gripping, thrilling, and brutal... Shunning misogynistic horror tropes in favor of genuine drama and pure creepiness, McGuire has crafted a masterpiece of suspense with engaging, appealing characters who conduct a soul-shredding examination of what's true and what's reported."—Publishers Weekly (Starred Review) on Feed

"Intelligent and intense, a thinking-person's post-apocalyptic zombie thriller set in a fully-realized future that is both fascinating and horrifying to behold."—John Joseph Adams on Feed

"I can't wait for the next book."—N.K. Jemisin on Feed

"It's a novel with as much brains as heart, and both are filling and delicious."—The A. V. Club on Feed

"OK, all of you readers who want something weighty and yet light, campy and yet smart, horror with heart, a summer beach read that will stay in your head and whisper to you "what if," Deadline is just what you are looking for."—RT Book Reviews on Deadline

"Intelligent and exciting...raises the bar for the genre."—Telegraph on Deadline

"Wry and entertaining."—NPR Books on Blackout