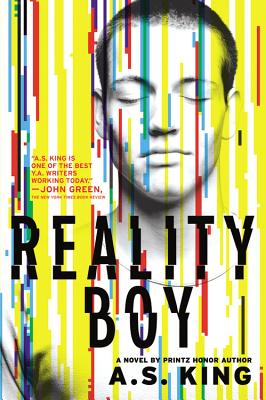 In this fearless portrayal of a boy on the edge, highly acclaimed Printz Honor author A.S. King explores the desperate reality of a former child "star" struggling to break free of his anger.

Gerald Faust started feeling angry even before his mother invited a reality TV crew into his five-year-old life. Twelve years later, he's still haunted by his rage-filled youth--which the entire world got to watch from every imaginable angle--and his anger issues have resulted in violent outbursts, zero friends, and clueless adults dumping him in the special education room at school. No one cares that Gerald has tried to learn to control himself; they're all just waiting for him to snap. And he's starting to feel dangerously close to doing just that...until he chooses to create possibilities for himself that he never knew he deserved.

A.S. King has been called “One of the best Y.A. writers working today” by the New York Times Book Review and is a recipient of the Margaret A. Edwards Award for lifetime achievement in writing for young adults. King is the author of novels including the 2020 Michael L. Printz Award-winning Dig.,Glory O'Brien's History of the Future, the 2013 Los Angeles Times Book Prize winner Ask the Passengers, and 2011 Printz Honor Book Please Ignore Vera Dietz, among others. Her most recent release, Switch, has been called "a work of literary genius" by Booklist. She is a faculty member at Vermont College of Fine Arts and spends many months of the year traveling the country speaking to high school students about trauma, emotions, and red velvet cake. After many years living self-sufficiently and teaching literacy to adults in Ireland, she now lives in Pennsylvania. Find more at www.as-king.com.

"A.S. King is one of the best Y.A. writers working today. She captures the disorientation of adolescence brilliantly.... Reality Boy is finally a novel about whether you are fated to the life the world expects you to have."—John Green, The New York Times Book Review

* "Heart-pounding and heartbreaking.... a compulsively readable portrait of two imperfect teens learning to trust each other and themselves."—Kirkus Reviews, starred review

* "A nuanced portrayal....This is a story about healing."—Publishers Weekly, starred review

"Put down the remote and pick up Reality Boy--it's a showstopper."—The Horn Book

"The hallmarks of [King's] strong work are there: magical realism, heightened emotion, and the steady, torturous, beautiful transition into self-assured inner peace. Like Gerald, it's wonderfully broken."—Booklist

"[A] smart and sympathetic story about breaking free from the world's expectations."—The Bulletin

"We all know at least one teen who needs a book like this; I didn't know I needed it until I turned the last page."—Dodie Ownes, SLJTeen