Everybody Sees the Ants (Hardcover) 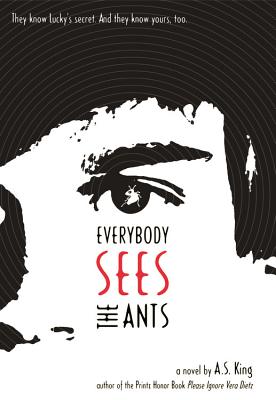 By A.S. King
Email or call for price
Out Of Stock Indefinitely

But Lucky has a secret--one that helps him wade through the daily mundane torture of his life. In his dreams, Lucky escapes to the war-ridden jungles of Laos--the prison his grandfather couldn't escape--where Lucky can be a real man, an adventurer, and a hero. It's dangerous and wild, and it's a place where his life just might be worth living. But how long can Lucky keep hiding in his dreams before reality forces its way inside?

Michael L. Printz Honor recipient A.S. King's smart, funny and boldly original writing shines in this powerful novel about learning to cope with the shrapnel life throws at you and taking a stand against it.

* "Blending magic and realism, this is a subtly written, profoundly honest novel about a kid falling through the cracks and pulling himself back up."—Booklist, starred review

* "A smart, funny, and passionate novel that embodies the idea that 'It Gets Better'--when you take action."—Publishers Weekly, starred review

* "King's heartfelt tale easily blends realism and fantasy.... A haunting but at times funny tale about what it means to want to take one's life, but rising above it so that living becomes the better option."—School Library Journal, starred review

* "The unusual and occasionally comic juxtaposition of the POW experience with Lucky's victimization... [offers] compelling food for thought about the things we can control and the things we can't, and how that distinction ultimately determines the need for action."—The Bulletin of the Center for Children's Books, starred review

"A resonant, uplifting story about not just
getting through, but powering through, the tough times."—Kirkus Reviews