Yours, for Probably Always: Martha Gellhorn's Letters of Love and War 1930-1949 (Hardcover) 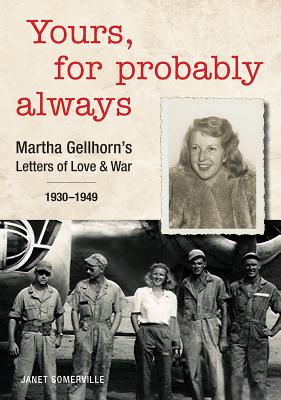 (starred review) Somerville makes an impressive book debut with a life of novelist, journalist, and intrepid war correspondent Martha Gellhorn (1908-1998), told through a captivating selection of her letters to friends, family, husbands, and lovers. The volume is enriched by Somerville's biographical narrative and her decision to include responses of many recipients and, in some cases, letters between individuals who were especially significant in Gellhorn's life... An engrossing collection that burnishes Gellhorn's reputation as an astute observer, insightful writer, and uniquely brave woman.
--Kirkus, July 08, 2019

A titan of American letters. It's high time for Gellhorn to emerge from the shadows of twentieth-century literature into the bright light of mainstream recognition.
--The Washington Post Book World (on Martha Gelhorn)

Before email, when long distance telephone calls were difficult and expensive, people wrote letters, often several each day. Today, those letters provide an intimate and revealing look at the lives and loves of the people who wrote them. When the author is a brilliant writer who lived an exciting, eventful life, the letters are especially interesting.

Martha Gellhorn was a strong-willed, self-made, modern woman whose journalism, and life, were widely influential at the time and cleared a path for women who came after her. An ardent anti-fascist, she abhorred objectivity shit and wrote about real people doing real things with intelligence and passion. She is most famous, to her enduring exasperation, as Ernest Hemingway's third wife. Long after their divorce, her short tenure as Mrs. Hemingway from 1940 to 1945 invariably eclipsed her writing and, consequently, she never received her full due.

Yours, for Probably Always is a curated collection of letters between Gellhorn and the extraordinary personalities that were her correspondents in the most interesting time of her life. Through these letters and the author's contextual narrative, the book covers Gellhorn's life and work, including her time reporting for Harry Hopkins and America's Federal Emergency Relief Administration in the 1930s, her newspaper and magazine reportage during the Spanish Civil War, World War II and the Vietnam War, and her relationships with Hemingway and General James M. Gavin late in the war, and her many lovers and affairs.

Gellhorn's fiction of the time sold well: The Trouble I've Seen (1936) -- her Depression-Era stories based on the FERA activities, with an introduction by H.G. Wells; A Stricken Field (1940) -- a novel inspired by the German-Jewish refugee crisis and set in 1938 Czechoslovakia; The Heart of Another (1941) -- stories edited by Maxwell Perkins; and The Wine of Astonishment (1948) -- her novel about the liberation of Dachau, which she reported for Collier's.

Gellhorn's life, reportage, fiction and correspondence reveal her passionate advocacy of social justice and her need to tell the stories of the people who were the sufferers of history. Renewed interest in her life makes this new collection, packed with newly discovered letters and pictures, fascinating reading.

Janet Somerville taught literature for 20 years in Toronto. Since 2015, she has been wholly immersed in Martha Gellhorn's life and words, privileged to have ongoing access to Gellhorn's restricted papers in Boston, Massachusetts.