Travels with Charley in Search of America (Paperback) 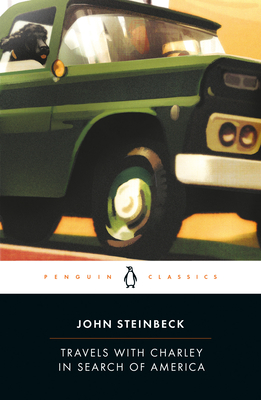 An intimate journey across America, as told by one of its most beloved writers

In September 1960, John Steinbeck embarked on a journey across America. He felt that he might have lost touch with the country, with its speech, the smell of its grass and trees, its color and quality of light, the pulse of its people. To reassure himself, he set out on a voyage of rediscovery of the American identity, accompanied by a distinguished French poodle named Charley; and riding in a three-quarter-ton pickup truck named Rocinante.

His course took him through almost forty states: northward from Long Island to Maine; through the Midwest to Chicago; onward by way of Minnesota, North Dakota, Montana (with which he fell in love), and Idaho to Seattle, south to San Francisco and his birthplace, Salinas; eastward through the Mojave, New Mexico, Arizona, to the vast hospitality of Texas, to New Orleans and a shocking drama of desegregation; finally, on the last leg, through Alabama, Virginia, Pennsylvania, and New Jersey to New York.

Travels with Charley in Search of America is an intimate look at one of America's most beloved writers in the later years of his life—a self-portrait of a man who never wrote an explicit autobiography. Written during a time of upheaval and racial tension in the South—which Steinbeck witnessed firsthand—Travels with Charley is a stunning evocation of America on the eve of a tumultuous decade. This Penguin Classics edition includes an introduction by Jay Parini.

John Steinbeck, born in Salinas, California, in 1902, grew up in a fertile agricultural valley, about twenty-five miles from the Pacific Coast. Both the valley and the coast would serve as settings for some of his best fiction. In 1919 he went to Stanford University, where he intermittently enrolled in literature and writing courses until he left in 1925 without taking a degree. During the next five years he supported himself as a laborer and journalist in New York City, all the time working on his first novel, Cup of Gold (1929).

After marriage and a move to Pacific Grove, he published two California books, The Pastures of Heaven (1932) and To a God Unknown (1933), and worked on short stories later collected in The Long Valley (1938). Popular success and financial security came only with Tortilla Flat (1935), stories about Monterey’s paisanos. A ceaseless experimenter throughout his career, Steinbeck changed courses regularly. Three powerful novels of the late 1930s focused on the California laboring class: In Dubious Battle (1936), Of Mice and Men (1937), and the book considered by many his finest, The Grapes of Wrath (1939). The Grapes of Wrath won both the National Book Award and the Pulitzer Prize in 1939.

Early in the 1940s, Steinbeck became a filmmaker with The Forgotten Village (1941) and a serious student of marine biology with Sea of Cortez (1941). He devoted his services to the war, writing Bombs Away (1942) and the controversial play-novelette The Moon is Down (1942).Cannery Row (1945), The Wayward Bus (1948), another experimental drama, Burning Bright(1950), and The Log from the Sea of Cortez (1951) preceded publication of the monumental East of Eden (1952), an ambitious saga of the Salinas Valley and his own family’s history.

The last decades of his life were spent in New York City and Sag Harbor with his third wife, with whom he traveled widely. Later books include Sweet Thursday (1954), The Short Reign of Pippin IV: A Fabrication (1957), Once There Was a War (1958), The Winter of Our Discontent (1961),Travels with Charley in Search of America (1962), America and Americans (1966), and the posthumously published Journal of a Novel: The East of Eden Letters (1969), Viva Zapata!(1975), The Acts of King Arthur and His Noble Knights (1976), and Working Days: The Journals of The Grapes of Wrath (1989).

Steinbeck received the Nobel Prize in Literature in 1962, and, in 1964, he was presented with the United States Medal of Freedom by President Lyndon B. Johnson. Steinbeck died in New York in 1968. Today, more than thirty years after his death, he remains one of America's greatest writers and cultural figures.

Jay Parini who teaches English at Middlebury College, is the author of five novels including Benjamin's Crossing and The Last Station.

“Pure delight, a pungent potpourri of places and people interspersed with bittersweet essays on everything from the emotional difficulties of growing old to the reasons why giant sequoias arouse such awe.” —The New York Times Book Review

“Profound, sympathetic, often angry . . . an honest moving book by one of our great writers.” —The San Francisco Examiner

“The eager, sensuous pages in which he writes about what he found and whom he encountered frame a picture of our human nature in the twentieth century which will not soon be surpassed.” —Edward Weeks, The Atlantic Monthly