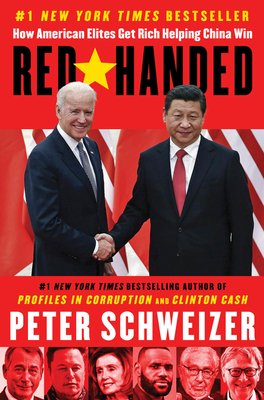 ?Peter Schweizer says that, in a quarter-century as an investigative journalist, this is the scariest investigation he has ever conducted.

That the Chinese government seeks to infiltrate American institutions is hardly surprising. What is wholly new, however, are the number of American elites who are eager to help the Chinese dictatorship in its quest for global hegemony.

In Red-Handed, six-time New York Times bestselling investigator Peter Schweizer presents his most alarming findings to date by revealing the secret deals wealthy Americans have cut to help China build its military, technological, and economic might. Equally as astonishing, many of these elites quietly believe the Chinese dictatorial regime is superior to American democracy.

Schweizer and his team of forensic investigators spent over a year scouring a massive trove of global corporate records and legal filings to expose the hidden transactions China’s enablers hoped would never see the light of day. And as Schweizer’s past bombshells like Profiles in Corruption, Secret Empires, and Clinton Cash all made clear, there are bad actors on both ends of the political spectrum.

Exhaustively researched, crisply told, and chilling, Red-Handed will expose the nexus of power between the Chinese government and the American elites who do its bidding.

Peter Schweizer is the president of the Government Accountability Institute and the former William J. Casey Fellow at the Hoover Institution, Stanford University. He is a number one New York Times bestselling author whose books have been translated into eleven languages.