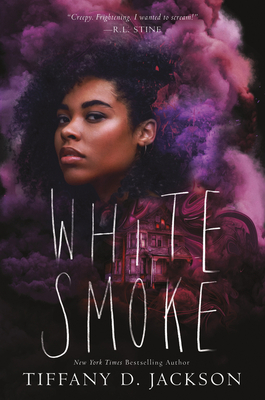 “Tiffany Jackson blends gentrification, for-profit prisons, mental illness, generational trauma, and addiction in a compelling plot with spine-tingling scenes that will make you sleep with the lights on.”
— Carissa Mina, The Wandering Jellyfish Bookshop, Niwot, CO

The Haunting of Hill House meets Get Out in this chilling YA psychological thriller and modern take on the classic haunted house story from New York Times bestselling author Tiffany D. Jackson!

Marigold is running from ghosts. The phantoms of her old life keep haunting her, but a move with her newly blended family from their small California beach town to the embattled Midwestern city of Cedarville might be the fresh start she needs. Her mom has accepted a new job with the Sterling Foundation that comes with a free house, one that Mari now has to share with her bratty ten-year-old stepsister, Piper.

The renovated picture-perfect home on Maple Street, sitting between dilapidated houses, surrounded by wary neighbors has its . . . secrets. That’s only half the problem: household items vanish, doors open on their own, lights turn off, shadows walk past rooms, voices can be heard in the walls, and there’s a foul smell seeping through the vents only Mari seems to notice. Worse: Piper keeps talking about a friend who wants Mari gone.

But “running from ghosts” is just a metaphor, right?

As the house closes in, Mari learns that the danger isn’t limited to Maple Street. Cedarville has its secrets, too. And secrets always find their way through the cracks.

Tiffany D. Jackson is the critically acclaimed author of Allegedly, Monday’s Not Coming, and Let Me Hear a Rhyme. A Walter Dean Myers Honor Book and Coretta Scott King–John Steptoe New Talent Award winner, she received her bachelor of arts in film from Howard University, earned her master of arts in media studies from the New School, and has over a decade in TV and film experience. The Brooklyn native still resides in the borough she loves. You can visit her at www.writeinbk.com.

“Thrilling, chilling, and utterly riveting. Tiffany D. Jackson crafts high-stakes tension, a deliciously creepy atmosphere, and characters you really, really hope make it to the end." — Karen McManus, #1 New York Times bestselling author of One of Us Is Lying

“The creeps come on slowly, then start to build. When the cold shivers ran down my back, I wanted to scream—but I was too busy turning pages. I had to know: Just how frightening will it get?” — R.L. Stine, author Goosebumps and Fear Street

“Tiffany Jackson takes the classic haunted house story to the next level by infusing it with her trademark twists and turns and her brilliant and unflinching prose. White Smoke is a gripping, unsettling, and incisive novel by a YA powerhouse who knows her thrills—and her chills.”  — Courtney Summers, New York Times bestselling author of Sadie and The Project

"Jackson conjures horrors both supernatural and otherwise in a masterful juxtaposition of searing social commentary and genuinely creepy haunts, as well as providing an authentic portrayal of tensions within a blended family. Begs to be finished in one sitting, though maybe with the lights kept on." — Kirkus Reviews (starred review)

“A transcendent, genre-defining masterpiece. Jordan Peele would be proud.”  — Shondaland

“Jackson is one of the most innovative YA suspense writers in recent years, and her latest is no exception.”  — School Library Journal (starred review)

"The nuanced depiction of Mari’s struggle with mental health is emotionally resonant; the story of a mostly Black city nearly wiped out by draconian drug laws and gentrification is authentic and timely; and the simmering tension and jump scares make the horror element satisfyingly chilling... Jackson ticks off the best tropes of horror here with enthusiastic glee, and Ms. Suga will have more than a few readers checking their basements before bedtime." — Bulletin of the Center for Children’s Books

“The queen of YA returns.” — Entertainment Weekly

Praise for Grown: "Gripping in both its content and format... Jackson's writing some of the best thrillers for teens these days." — Booklist (starred review)

"Expertly juxtaposing the glamour of Enchanted’s potential fame against the harshness of her private moments with Korey, Jackson builds the story gradually and painfully to an astonishing, chilling climax." — Publishers Weekly (starred review)

"In another ripped-from-the-headlines novel, Jackson takes readers through a heart-pounding thriller exploring physical, sexual, and emotional abuse, misogynoir, and rape culture... this novel is sure to initiate important conversations while delivering an engrossing story." — Horn Book Magazine

"Jackson draws on the R. Kelly case to effectively depict the tightening noose of an abusive relationship, enhanced here by Korey’s wealth and fame…A grim tale that shows how thin a glossy exterior can be."   — Bulletin of the Center for Children’s Books

"Tiffany D. Jackson has penned a riveting, powerful love story to Black girlhood and a haunting reminder of the ways in which their innocence is often stolen. Remarkable, suspenseful, and gut-wrenching, Grown is a masterfully told story that stays with you long after you put it down." — Angie Thomas, #1 New York Times bestselling author of The Hate U Give and On the Come Up

“With a gripping plot and punch-to-the-heart stakes, Tiffany D. Jackson’s Grown exposes the underbelly of a tough conversation—the seductive abuse of older men who prey on teen girls—providing a searing examination of misogynoir, rape culture, and the vulnerability of young black girls. Groundbreaking, heart wrenching, and essential reading for all in the #MeToo era.”  — Dhonielle Clayton, New York Times bestselling author of The Belles

“Never have I read a story that so flawlessly hits the highest high and lowest low notes of Black girlhood in pursuit of the American Dream. Tiffany D. Jackson has done it again.” — Nic Stone, #1 New York Times bestselling author of Dear Martin and Jackpot

“This heart-pounding, powerful story about a young girl trapped in a predator’s web holds up a devastating mirror to our society’s refusal to care about all victims. A call-out and condemnation of the celebrity-besotted culture that allows evil people to destroy lives.”  — Laurie Halse Anderson, New York Times bestselling author of Shout

“Grown is equal parts riveting and alarming. It asks hard questions about power, innocence, and who we, as a society, see as worth saving. A captivating and cautionary page-turner." — Ashley Woodfolk, author of When You Were Everything

Praise for Let Me Hear a Rhyme: * “Exceptional storytelling, well-crafted, true-to-life dialogue, and the richly drawn Brooklyn landscape will draw readers into this fast-paced blend of mystery, budding romance, and social commentary...Thoroughly engrossing and as infectious as Steph’s lyrics.” — Kirkus Reviews (starred review)

* “Jackson repeatedly proves that she is a titan among her peers, and her latest novel is no exception...  Jackson weaves the three points of view together seamlessly, creating richly drawn and authentically real teen characters.” — ALA Booklist (starred review)

* “Deftly chronicles the timely story of bold young talent gone too soon... Jackson scores a bull’s-eye with her passionate homage to black city life in the late ’90s, yet it’s her earnest takes on creativity, love, and loss that are timeless.” — Publishers Weekly (starred review)

* “Readers will feel connected to these teens’ love of hip-hop, their loyalty to each other and their love for their community... offers moving portraits of young people... an engaging ode to ’90s hip-hop and to love in many forms.” — BookPage (starred review)

“With thoughtful attention to detail, Jackson offers a believable cast of Black teens immersed in a particularly rich hip-hop moment. The combination of lyricism and narrative realism is an effective mode of representing a particular sort of adolescence against the backdrops of New York City and rap music.” — Bulletin of the Center for Children’s Books

“Jackson presents a fast-moving, heart-pounding homage to nineties hip-hop, Brooklyn, and the power of music, love, and friendship. Readers are transported to a time when DJs and MCs rocked the parties and when word-of-mouth could make you a star.”

PRAISE FOR MONDAY’S NOT COMING: “A mesmerizing, punch-in-the-gut story about the power of friendship and the horrors hiding right in front of us.” — Laurie Halse Anderson, author of Speak and Chains

* “This thought-provoking thriller examines issues such as abuse, gentrification, and the marginalization of people of color with nuance and sensitivity. The narrative deftly moves back and forth between past and present, building to a devastating conclusion. A spellbinding, profoundly moving choice for YA collections.” — School Library Journal (starred review)

* “Jackson’s sophomore novel features another ripped-from-the-headlines premise that will keep readers guessing through the final pages. Jackson’s characters and their heart-wrenching story linger long after the final page, urging readers to advocate for those who are disenfranchised and forgotten by society and the system.” — Publishers Weekly (starred review)

* “Jackson effortlessly weaves elements of suspense with issues of race, class, and gender, casting a harsh light on a world that often refuses to notice the disappearances of black and brown girls. The twist at the end is both gaspworthy and heartbreaking.” — Bulletin of the Center for Children’s Books (starred review)

“Jackson doesn’t hold anything back when it comes to the pain of abuse and the ramifications of turning a blind eye. It’s a frank, devastating read filled with real and flawed characters, and it’s a story that needs to be read.” — Booklist

“The draw of this novel, which was inspired by actual events, lies in its interwoven themes of the effects of gentrification, especially on black residents whose connections, culture, and community become afterthoughts in the face of capitalism. A tragic and heartbreaking tale of love, loss, grief, growth, and perseverance.” — Kirkus Reviews

PRAISE FOR ALLEGEDLY: * “With remarkable skill, Jackson offers an unflinching portrayal of the raw social outcomes when youth are entrapped in a vicious cycle of nonparenting and are sent spiraling down the prison-for-profit pipeline. Dark, suspenseful.” — School Library Journal (starred review)

* “Her novel effectively joins Ava DuVernay’s documentary 13th  and Michelle Alexander’s The New Jim Crow  (2010) to become another indictment of the penal system’s decimating power beyond its bars and, more subtly and refreshingly, a pro-reproductive-justice novel. Searing and true.” — Kirkus Reviews (starred review)

* “The characters are complex, the situation unsettling, and the line between right and wrong hopelessly blurred. It’s also intensely relevant, addressing race, age, and mental illness within the criminal justice system. Well conceived and executed, this is an absorbing and exceptional first novel.” — Publishers Weekly (starred review)

* “Suspenseful without being emotionally manipulative, compelling without resorting to shock value, this is a tightly spun debut that wrestles with many intense ideas and ends with a knife twist that will send readers racing back to the beginning again.” — Booklist (starred review)

“Seen through Jackson’s dark portrait of the legal system and the failures of parents and social workers, Mary’s environments are as grim as the stories that play out in them; readers fascinated by procedural dramas will be thoroughly hooked.” — Bulletin of the Center for Children’s Books