The Mystery of Charles Dickens (Hardcover) 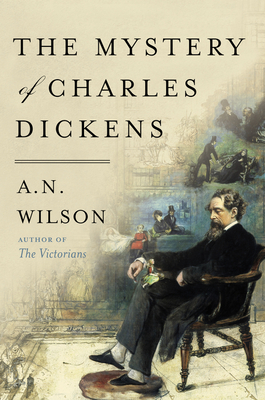 By A.N. Wilson
Not Currently Available- Email for More Information

Winner of the Plutarch Award for Best Biography

Charles Dickens was a superb public performer, a great orator and one of the most famous of the Eminent Victorians. Slight of build, with a frenzied, hyper-energetic personality, Dickens looked much older than his fifty-eight years when he died—an occasion marked by a crowded funeral at Westminster Abbey, despite his waking wishes for a small affair. Experiencing the worst and best of life during the Victorian Age, Dickens was not merely the conduit through whom some of the most beloved characters in literature came into the world. He was one of them.

Filled with the twists, pathos, and unusual characters that sprang from this novelist’s extraordinary imagination, The Mystery of Charles Dickens looks back from the legendary writer’s death to recall the key events in his life. In doing so, he seeks to understand Dickens’ creative genius and enduring popularity. Following his life from cradle to grave, it becomes clear that Dickens’s fiction drew from his life—a fact he acknowledged. Like Oliver Twist, Dickens suffered a wretched childhood, then grew up to become not only a respectable gentleman but an artist of prodigious popularity. Dickens knew firsthand the poverty and pain his characters endured, including the scandal of a failed marriage.

Going beyond standard narrative biography, A. N. Wilson brilliantly revisits the wellspring of Dickens’s vast and wild imagination, to reveal at long last why his novels captured the hearts of nineteenth century readers—and why they continue to resonate today.

The Mystery of Charles Dickens is illustrated with 30 black-and-white images.

A. N. Wilson grew up in Staffordshire, England, and was educated at Rugby and New College, Oxford. A Fellow of the Royal Society of Literature, he holds a prominent position in the world of literature and journalism. He is a prolific and award-winning biographer and celebrated novelist. He lives in North London.

“Wilson has taken a…near-fictive approach to Dickens’ life — posing and investigating several ‘mysteries’ about Dickens… The solutions to these ‘mysteries’ may never be found, Wilson argues; but they divulge fascinating contradictions in a man whose work has entertained more generations of readers than any writer could ever dream of.” — Los Angeles Times

“A sprightly work of reinterpretation… Mr. Wilson is a novelist, and he brings to the task of biography a shrewd sense of how creative writers operate, along with a large stock of intuitions about human nature. The results are frequently perceptive.” — Wall Street Journal

“His knowledge is wide, his writing fluent… Wilson has a number of persuasive ideas about Dickens, whom he sees as not only a conflicted personality but a tragic one, despite his genius for comedy.” — New York Times Book Review

“[An] utterly satisfying investigative narrative… A marvelous exploration by an author steeped in the craft of his subject’s elastic, elusive work.” — Kirkus Reviews (starred review)

“[Wilson] blend[s] perceptive analysis of the novels with parallel experiences in Dickens' life… Beyond the eye-opening analysis, Wilson also offers a moving personal account of why Dickens has meant so much to him.” — Booklist (starred review)

“Wilson’s admiration and understanding of the novelist makes this a book to debate and savor… His own alluring analysis on the mystery of Dickens could not be bettered.” — Seattle Book Review