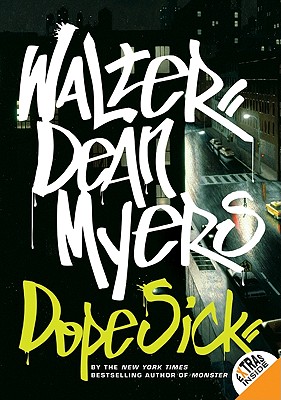 A drug deal goes south and a cop has been shot. Lil J's on the run. And he's starting to get dope sick. He'd do anything to change the last twenty-four hours, and when he stumbles into an abandoned building, it actually might be possible. . . .

Elements of magical realism intensify this harrowing story about drug use, violence, perceptions of reality, and second chances.

This ALA Quick Pick for Reluctant Young Adult Readers earned multiple starred reviews and was described as "vivid," "nuanced," and "intriguing." Booklist said: “Myers’ narrative strategy is so inherently dramatic that it captures his readers’ attentions and imaginations, inviting not only empathy but also thoughtful discussion.”

Walter Dean Myers was a New York Times bestselling author, Printz Award winner, five-time winner of the Coretta Scott King Award, two-time Newbery Honor recipient, and the National Ambassador for Young People's Literature. Maria Russo, writing in the New York Times, called Myers "one of the greats and a champion of diversity in children’s books well before the cause got mainstream attention."

Walter Dean Myers was the New York Times bestselling author of Monster, the winner of the first Michael L. Printz Award; a former National Ambassador for Young People's Literature; and an inaugural NYC Literary Honoree. Myers received every single major award in the field of children's literature. He was the author of two Newbery Honor Books and six Coretta Scott King Awardees. He was the recipient of the Margaret A. Edwards Award for lifetime achievement in writing for young adults, a three-time National Book Award Finalist, as well as the first-ever recipient of the Coretta Scott King-Virginia Hamilton Award for Lifetime Achievement.

“Rich, nuanced. The use of magical realism brings depth and an intriguing strangeness to the sharp-eyed observations of Harlem street life.” — School Library Journal (starred review)

“A didn’t-see-that-coming ending wraps up the story on a note of well-earned hope and will leave readers with plenty to think about.” — Publishers Weekly (starred review)

“Drugs, drive-by shootings, gang warfare, wasted lives—Myers has written about all these subjects with nuanced understanding and a hard-won, qualified sense of hope.” — New York Times

“Readers might be moved to consider what they’d do in their own lives if they could start with a clean slate.” — Bulletin of the Center for Children’s Books

“Myers’ narrative strategy is so inherently dramatic that it captures his readers’ attentions and imaginations, inviting not only empathy but also thoughtful discussion.” — ALA Booklist